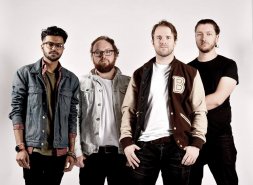 There's an exciting double bill in store for alternative rock lovers at Café Rene in Gloucester on Friday night (December 14).

Just So The Musical is a fun filled musical adventure, based on the Just So stories written in 1984 by Rudyard Kipling (author of The Jungle Book).

Four actors, one mystery...and no clue! A thrilling new comedy is currently touring round theatres, village halls and other community venues in Gloucestershire.

An amateur chamber choir is bringing a programme of Christmas music to the glorious setting of St Peter's Church, Winchcombe, on Saturday evening.

Aladdin has everything you could possibly wish for to make for a magical evening of good old-fashioned family entertainment.

Award-winning saxophonist to play at the Chapel

The festive season is in full swing with less than three weeks to go until the big day.

Essential Christmas evening with one of the best

Johnny Coppin, one of England`s finest singer-songwriters, presents a rich mix of carols and songs old and new, together with stories and folklore, at Stroud Subscription Rooms.

Next week is Walking Football Week in Gloucestershire – and anyone can come along and try this version of the beautiful game free of charge.

Knitivity to be welcomed to Cathedral by Gloucester Rugby players

Gloucester’s ever popular knitted Nativity will be welcomed back to the city’s Cathedral this afternoon (Thursday) by Gloucester Rugby players.

Uplifting song-filled journey through the jungle

Previews are underway for the finale show in the inaugural season of Barn Theatre productions with the staging of Just So, the Musical.

Carols on the hour and Christmas market at Cathedral

Gloucester Cathedral’s choirs are limbering up for a marathon carol-singing session on Saturday (December 8) when the hugely popular Carols on the Hour and Christmas Market returns.

The world famous Band of Her Majesty’s Royal Marines will be back in Cheltenham on Sunday (December 9) with a military music spectacular.

The Roses has come up with yet another seasonal winner for Tewkesbury audiences in the shape of its much-anticipated pantomime Dick Whittington.

Moving and funny recreation of the 1914 Christmas Truce

Following a packed and acclaimed show at Stroud Subscription Rooms in 2016, be transported once more in theatre, spoken word, live music and song to No Man’s Land in a moving and often funny re-creation of the 1914 Christmas Truce.

King's Walk is about to get all festive

Christmas is coming to Gloucester's Kings Walk Shopping Centre with plenty of special events lined up to get you in the festive spirit.

With the Christmas season just around the corner, we’ve picked out our favourite events going on in and around the county to get you into the festive swing.

December fun at Corinium Museum thanks to The National Lottery

From December 3-9 National Lottery players can visit the Corinium Museum in Cirencester for free.

Wondering what to buy Aunt Jane for Christmas? Well, come along to Tetbury Christmas Craft Fayre at the Goods Shed and you might find just what you’re looking for!

WIN: A family ticket to The Hatter in Winterland at Cheltenham Playhouse Theatre

Punchline are giving you a chance to win a family ticket (two adults and two children) to see this year's performance of The Hatter in Winterland at Cheltenham Playhouse Theatre.

Christmas shoppers are invited to take a break this weekend when a winter pavilion opens in King’s Square, Gloucester, on Saturday 1 and Sunday 2 December to show popular Christmas films and a variety of crowd-pleasing live music and comedy performances.

On Friday 7 and Saturday 8 December Gloucester Cathedral will be offering free Crypt and Tower Tours (plus a free goodie bag for the first 100 people) as part of The National Lottery’s #ThanksToYou campaign.

Cheltenham’s very own Noodle Productions has unveiled The Hatter in Winterland as its anticipated Christmas show for 2018, showing exclusively at Cheltenham Playhouse.

Intimate evening of jazz at the Goods Shed

Back by popular demand to the Tetbury Goods Shed, Fretless4 feature a pianist, bassist and guitarist – all great soloists in their own right.

Winchcombe is on Christmas countdown

Final festive preparations are underway in Winchcombe as it gets ready to welcome residents, families and visitors to its Christmas Festival on Tuesday, December 4.

Widdiful Holdings are hosting their first Christmas Brocante Fair in Cheltenham this weekend.

Craig David to perform in Cheltenham next May

Superstar Craig David and his full live band are set to perform at Jonny-Rocks Stadium, Cheltenham, on Friday, May 24.

Gloucestershire Music (County Music Service) is back with its final musical flurry for 2018.

Black Friday is known to be the start of a rather hectic weekend. Avoid the madness or unwind after a shopping spree with some fantastic events taking place this weekend in and around Gloucestershire.

Tree of Light set to be biggest ever

The Rotary Club of Gloucester’s Tree of Light is set to be switched on tomorrow (Saturday) at 4.30pm following an afternoon of entertainment.

An evening with the country's most famous farmer

Adam Henson is perhaps the best-known farmer in the UK, presenting his own section on BBC TV’s Countryfile to around 7 million viewers every Sunday evening.

Nell Gifford, founder of Gifford’s Circus, will be Cirencester’s special guest this year to switch on the town's Christmas Lights.

Festive weekend at The Museum in the Park

There's plenty to celebrate the start of the festive season at the Museum in the Park's final open weekend of 2018.

'The People's Tenor' comes to Cheltenham

Having sold more than seven million albums worldwide, Russell Watson is firmly established as the UK’s best-selling classical crossover artist of all time.

The Crown Players are performing an interesting murder mystery by Agatha Christie at the Kings Theatre in Gloucester next week.

Over 400 musicians will descend on Cheltenham on Sunday for a whole day of music making.

Brothers to battle it out in The Great Bourton Bake Off

A special event is taking part in Bourton-on-the-Water this Sunday as two cricketing brothers take part in the Great Bourton Bake Off to raise funds for a charity in memory of their mother.