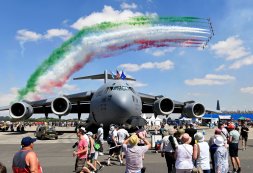 The Royal International Air Tattoo, due to take place at RAF Fairford in Gloucestershire this summer, has been cancelled.

The Cotswold Farm Park is set to close its gates tomorrow afternoon (Friday) for the foreseeable future due to the coronavirus.

Sudeley Castle and Gardens has closed until further notice in the wake of the coronavirus pandemic.

The 4th Polish Heritage Day in Gloucester, planned for May 11, has been postponed due to coronavirus.

The coronavirus pandemic has led to the cancellation or postponement of a number of popular festivals across Gloucestershire.

The Gloucestershire Warwickshire Steam Railway (GWSR) has suspended its steam and heritage diesel train services with immediate effect, over its 14-mile line between Cheltenham Racecourse and Broadway.

Lil is the new face of Giffords Circus

Berkeley Castle are very excited to be unveiling their newly-renovated Education Room in time for re-opening to visitors on Sunday, March 29.

Review: Ben Hur at the Barn Theatre in Cirencester

A classic Built by Barn performance of a show within a show.

Direct from the West End, 'Seven Drunken Nights' brings to life the music of Ireland's favourite sons The Dubliners.

The long-established English harmony beat group The Fortunes are set to perform at Cheltenham Town Hall on March 24, supported by local group Rockology, in aid of the Mayor’s charities, Cruse Bereavement Care and St Margaret’s Hall.

Choral masterpiece to be performed in stunning setting

Stroud Choral Society, conducted for the last time by their renowned musical director Huw Williams, with four internationally recognised soloists and the Bristol Ensemble orchestra, will perform Bach Mass in B Minor on Saturday (March 14).

Cheltenham Music Festival set to be another classic

Cheltenham Music Festival has announced 10 days of creative programming for its 76th Festival in July, as innovator and composer Jules Buckley joins as guest curator.

Joe Pasquale set to bring the house down as Frank Spencer

Hilarious mishaps and DIY disasters are bringing the house down, quite literally as Some Mothers Do 'Ave 'Em arrives in Cheltenham with Joe Pasquale as the loveable, accident-prone Frank Spencer next week.

A new trail springs up at Westonbirt Arboretum

After a long and wet winter, the first signs that spring is on the way are starting to be spotted at Forestry England’s Westonbirt, The National Arboretum.

Local bands the Stroud Ukulele Orchestra (UkeStroud) and The Whiteshillbillies are joining forces for what promises to be a truly great evening.

The Rolling Stones have dominated Rock ’n’ Roll music since the 1960s and were at the forefront of the British Invasion of bands that conquered the US in 1964.

Explore the more curious aspects of the Cotswolds

Cotswold Peculiars will be presented at the Corinium Museum in Cirencester by collections assistant Dr Caroline Morris on Wednesday, March 18, at 2.30pm.

Embrace and The Lightning Seeds added to Wychwood Festival line-up

Cheltenham-based Wychwood Festival have make their second line-up announcement, with Embrace and The Lightning Seeds added to the bill with even more to come!

SoliDeisten - a sextet of Dresden soloists - are performing an informal free lunchtime concert in the Nave of Gloucester Cathedral tomorrow (Friday).

Bremner's back at The Barn for Easter fun

As part of the Bremner at the Barn season, the UK’s best loved impressionist and comedian, returns to Cirencester with his Rory’s Easter Bunny Special on Sunday, March 15.

Create a colour wheel and be part of new exhibition

Colour-ways: Lights Works by Liz West brings colour to The Wilson Art Gallery and Museum in a new and exciting way.

Stroud Film Festival is up and running

The sixth Stroud Film Festival is underway with events running at 12 independent venues across the town and beyond.

Gloucestershire Police Male Voice Choir is celebrating its Golden Jubilee by putting on four special charity concerts this year in what it is calling the 'Four Seasons' Concert Series.

ABBA lovers are in for a great evening of song and dance this coming weekend, all in aid of a Gloucestershire-based charity.

Special guests to "Funk It Up" at this year's Phoenix Festival

The Phoenix Festival is excited to announce that Robbie Glenn, the UKs best Bruno Mars Tribute Act, is to top the line-up as special guests on Saturday, August 29. So get ready for some “Uptown Funk”!