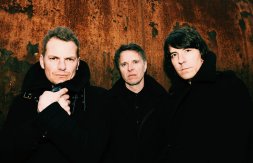 New acts revealed for Sudeley's Party at the Castle

Toploader, Sara Cox and comedy double act Dick & Dom have been announced as the latest artists performing at Sudeley Castle’s Party at The Castle event this summer.

Prepare for a gem of a rock show!

Review: A Bunch of Amateurs at Cheltenham Playhouse

Cheltenham Operatic and Dramatic Society (CODS) commenced the winter season with the comedy A Bunch of Amateurs at Cheltenham Playhouse.

Let your children unleash their inner creative this February half-term in one of the many hands-on activities on offer at Taurus Crafts.

The world’s favourite aerobatic display team will be performing their final salute at the Air Tattoo this summer, before they jet off on a high-profile tour of the USA and Canada.

Don’t let the snow stop you visiting the great events and activities going on in the county this weekend.

A Gloucester-based book club for young adults is set to welcome two special guests over the next few weeks.

Get stuck in to Silly Science Workshops

Children have a chance to roll up their sleeves and take part in a Silly Science Workshop during the February half-term.

Libraries across Gloucestershire are joining Harry Potter fans across the world to celebrate the fifth annual Harry Potter Book Night on Thursday, February 7.

Prepare for an intoxicating evening

The Thinking Drinkers are back on tour - and at Cheltenham Town Hall next Thursday - with a brand-new, hilarious, intoxicating bar-hop through history.

Gloucester Cathedral is inviting everyone to attend a Candlemas Carol Service on Sunday, February 3, at 6pm.

Following the success of The Gruffalo, Stick Man and Highway Rat trails at Forestry Commission sites across England, Julia Donaldson and Axel Scheffler’s magical children’s picture book, Zog, is the new activity trail for families to enjoy at Westonbirt Arboretum.

New season springs to life at the Everyman

Fresh from the most successful pantomime ever (Aladdin sold more than 46,000 tickets) the Everyman has just launched its winter/spring season with a brochure packed with shows to suit all tastes.

In the spirit of Dry January, The Sober Parrot, the South West’s first dry bar, is hosting a festival to celebrate the mind, body and soul.

The CrazyBird Comedy Club is proud to bring the legendary children’s entertainer ‘El Baldiniho’ to The Prince Albert in Stroud during February half-term.

Relive the sensational Sounds of the 60s

Experience the Sounds of the 60s with the spectacular sounds of The Zoots!

There’s plenty going on in and around the county this weekend to ensure your January finishes on a high.

CODS all set for a cracking winter comedy

Cheltenham Operatic and Dramatic Society (CODS) continues its tradition of the past few years by starting their season with a winter comedy at Cheltenham Playhouse.

Racegoers planning on booking tickets for this year’s Festival are advised to do so before Monday to beat the price rise.

No one is off limits for impressionist Luke

One of the most successful dance shows ever

The international smash hit Spirit of the Dance, which celebrates its record-breaking 20-year anniversary as one of the most successful dance shows ever, is coming to Cheltenham Town Hall.

The Phoenix Festival is delighted to announce that bringing the festival to a climax on Sunday, August 25, will be none other than Totally Tina, the UK’s official number one Tina Turner tribute show.

WIN: A family ticket to Cheltenham's other festival - Cocklebarrow Races

Experience the thrill of jump racing - just a short gallop from Cheltenham Racecourse.

Nestling in a hidden valley of Gloucestershire, Painswick's Rococo Garden is gearing up for one of its busiest times of the year.

BBC Radio 1 presenter Scott Mills has been unveiled as the guest DJ after racing on Festival Trials Day at Cheltenham Racecourse on Saturday (January 26).

Critically acclaimed as one of the world’s greatest tribute shows, Simon & Garfunkel Through The Years is on its way to the Stroud Subscription Rooms.

This summer's Air Tattoo at RAF Fairford will feature a display from the Swiss Air Force!

Review: Snow White and the Seven Dwarfs at the Bacon Theatre, Cheltenham

Whether you missed out on panto over Christmas or you just want to boo and hiss one last time, you could do a lot worse than head for the Bacon Theatre in Cheltenham for Snow White and the Seven Dwarfs.

A drag show you will never forget

The audience at The Barn Theatre in Cirencester is in for a treat tomorrow (Saturday) evening as Gregory Hazel's dazzling vocals, wit and charm will take you through a celebration of musical theatre’s most iconic women.

The Scummy Mummies comedy duo are making their way to the Sundial Theatre in Cirencester next month.

A trio of headliners from the West Country folk & blues scene will be playing at Under the Edge Arts on Saturday, January 26.

Get set for an incendiary live performance

From the Jam will be celebrating the 40th anniversary of The Jam’s third studio album, All Mod Cons, at Cheltenham Town Hall tomorrow evening (Friday).

And they're off...parkrun launched in Moreton-in-Marsh

Moreton-in-Marsh is delighted to announce the arrival of parkrun at the Fire Service College, meaning North Cotswold residents no longer need to drive 15 miles or so to get active at the weekend.

'The History Guy' set to delve into Tewkesbury's past

The well-known historian and TV presenter Dan Snow recounts anecdotes of memorable experiences from his very successful career as an historian and broadcaster.

Gentlemen of the North Cotswolds and from surrounding towns and villages are very welcome to join the Blockley Blokes Choir for a new members’ social evening on Thursday.

Room for just one more panto in the Forest

The pantomime season just keeps on going in Gloucestershire as the Forest Musical Society prepare for their family panto in Lydney.

One of Britain’s best live bands, Stereophonics, have announced a date at Westonbirt Arboretum as part of Forest Live, the summer concert series promoted by the Forestry Commission.