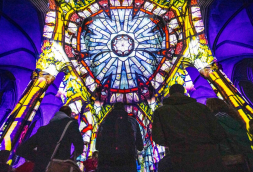 This November, Tewkesbury Together invites everyone to experience Tewkesbury Festival of Lights, an incredible immersive light and sound show telling the unique story of the town.

Legendary guitarist's show not to be missed

One of the finest guitarists the world has ever seen is performing at Stroud Subscription Rooms later this month.

Rock 'n' Roll and Ska tribute nights at the Sundial

Two very different evenings of tribute music are coming up at Cirencester's Sundial Theatre in October.

On Saturday 18 September, from 10am to 1pm, the American Gardens (behind the Town Hall) in Tewkesbury will host Regenerate the High Street.

Will the audience solve the murder mystery?

The Bishops Cleeve Players are eagerly anticipating their next production at the village's historic Tithe Barn in September.

Party on down to the riverbank!

Kenneth Graham's classic story The Wind in the Willows comes dramatically to life at the Roses Theatre in Tewkesbury this coming Saturday afternoon (September 4).

The popular Kingfisher Trail, a unique collection of 22 artist designed sculptures dotted across the Cotswolds, is soon to swoop to a close.

Pittville Pump Rooms in Cheltenham is hosting its annual Christmas Artisan Market as part of its Christmas light switch on.

Gloucestershire’s Gifford Circus has been forced to close down for 10 days, after team members tested positive for Covid.

Witcombe Festival, one of the UK’s fastest growing festivals, gets underway in Brockworth today (27th August).

Cheltenham Town Hall is hosting an incredible orchestral concert series featuring musicians from all around the world, starting in the Autumn.

Two for one at the Everyman for Charlie Chaplin story

The Everyman Theatre, Cheltenham is offering a two for the price of one offer to see a show all about the life of world-renowned silent movie star Charlie Chaplin.

Have a fun filled bank holiday weekend with the kids

Want to send the summer holidays off with a bang? Look no further.

View posters from the Steam Age at Cotswold railway station

His first ever solo exhibition is entitled -Created in Coflict-.

The Canadian singer-songwriter had 50 years of musical success.

Moreton Show is a go as judges are lined up

Preparations for the Moreton Show 2021 on September 4th are in full swing.

The sunflowers are almost in full bloom at the Cotswold Farm Park!

'Oh What A Night' at the Bacon Theatre!

After five years of touring the world, the award-winning Frankie’s Guys are making their way to Cheltenham on Saturday, August 28, for a night to remember!

Murder on the Forest Express

All aboard the Dean Forest Railway to crack a case of murder most foul!

Recreating the magic of Adele

Someone Like You - The Adele Songbook is a stunning live concert performance, celebrating the music of one of our generation's finest singer-songwriters.

Cirencester’s Golden Cross Inn will show that it is up for a laugh by hosting Barking Toad Comedy.

Celebration of film scores set to be a blockbuster

Following their phenomenal John Williams concert in 2019, The Studio Orchestra return to Cheltenham Town Hall with a glittering celebration of the world’s greatest film scores.

CrazyBird comedy is excited to bring one of comedy’s heavyweights to The Sub Rooms in Stroud on Thursday, September 9.

Folk singer/songwriter Johnny Coppin will be performing at Chapel Arts in Cheltenham on Thursday, September 2, at 7.30pm, with guest Paul Burgess.

'Delightfully daft' retelling of Beauty and the Beast

Following their sell-out success with The Wonderful Wizard of Oz, IKP return to Painswick's Rococo Garden with a brand new retelling of the classic story Beauty and the Beast.