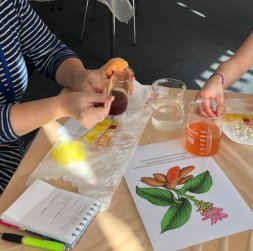 Fabulous hands-on workshops are being held at Stroud's Museum in the Park with Stroudwater Textile Trust.

An inspiring wetland-themed sculpture ‘Nest’ by awarding-winning metal sculptor Ian Gill is now complete on the A38 Slimbridge roundabout, as part of Slimbridge Wetland Centre’s 75 project.

Dobbies gets Spooktacular this Halloween

Perfect for a ghoulishly good family day out, Dobbies’ Halloween Spooktacular will get the whole family in the spooky spirit in Gloucestershire this October.

Russell Watson's top tips for success in the music industry

Lecturer to give talk on Rodmarton Manor

Mary Greensted, former curator of Cheltenham Museum and former Chair of the Gloucestershire Guild of Craftsmen, is the special guest of The Athelstan Museum in Malmesbury on Wednesday, November 24).

Durannies in for a night to remember

Durannies are in for a treat when the ultimate Duran Duran tribute band show comes to the Cotswolds this week.

The Quay to a wonderful Christmas!

Gloucester Quays is pulling out all the stops this Christmas, offering everything from gorgeous gifts to delicious dining and magical open air ice skating.

A group of big-hearted folk at a local football club have united to put on an afternoon and evening of Halloween fun for families this October half-term in support of a Gloucestershire hospice.

The 70th anniversary of the Imjin Battle in Korea, in which the hugely outnumbered soldiers of the 'Glorious Glosters' held off the Chinese army, is to be marked later this month with a newly commissioned musical work called 'Holding the Hill'.

Record number of events at #CheltLitFest

Across ten extraordinary autumnal days, The Times and The Sunday Times Cheltenham Literature Festival welcomed the world’s greatest writers and thinkers for an international celebration of the written word in all its glorious variety.

Cancer charity Maggie’s in Cheltenham is encouraging people to get together around their kitchen table and fundraise on Friday, November 5, for Maggie’s Kitchen Table Day.

Calendar Girls show cast have all been affected by cancer

A charity production of the hit musical and motion picture of Calendar Girls is to take to the stage in Cirencester to raise money for two cancer charities.
The whole of the cast having been affected by or suffered with cancer.

The Kingfisher Trail, a truly unique collection of 22 individually designed sculptures, has swooped to a close in the Cotswolds.

As part of its growing collection of curated experiences for guests, luxury boutique manor house Burleigh Court, near Minchinhampton, is holding wild wreath making sessions ahead of Christmas.

Alien ravers HENGE are embarking on a new mission to spread peace, love and joy across the UK.

See a music legend at an iconic venue

Chart-topping singer Tony Christie is performing at the beautiful Tithe Barn in Bishop's Cleeve on Sunday, October 24 - and there are still some tickets available.

The Postcard Series at Cheltenham gallery

Spring Cheltenham is absolutely delighted to showcase a new collection of paintings by the incomparable Jon Wealleans.

Sculpture and photography combine in exhibition

A fascinating exhibition of sculptures and photographs by two artists has opened at Gallery Pangolin at Chalford, near Stroud.

Walk under the stars for charity this Saturday

People in Gloucestershire still have a chance to join healthcare charity Sue Ryder for its Starlight Hike on Saturday (October 16) to celebrate the lives of loved ones who have died.

Alan Ranger Photography, a professional photography tutor based in Warwickshire, has led the autumn photography workshops at Batsford for over eight years.

It's time to party with Marti!

Former Wet Wet Wet lead singer Marti Pellow has listened to his fans and is staging a Greatest Hits tour...including a stop-off in Stroud next Spring.

Dean Forest Railway is holding a weekend of special events to celebrate the 50th anniversary of the first public train being operated.

The first events for the winter Bright Nights programme, Gloucester’s festival of light, have been announced with an array of light installations including works by international artists.

A new leader and a new term for Rock Choir

Tewkesbury Rock Choir has launched its new term under the guidance of a new leader – Jacob Ashworth.