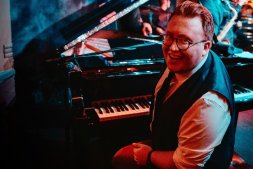 Cirencester’s Ingleside House welcomes Tom Seales – Piano Man on Friday 19 and Saturday 20 November, the second in their 2021 instalments of live entertainment and dinner.

Discover what is missing from the Bayeux Tapestry

Leading historian Dr David Musgrove is giving an evening lecture in Cirencester entitled What is Missing from the Bayeux Tapestry?

Three artists are joining forces to hold an exhibition at the stunning Sixteen Gallery in Montpellier, Cheltenham, next month

Panto promises to be a real beauty

The Phoenix Theatre Group are gearing up to present a festive family treat for all ages at Stroud Subscription Rooms in December.

Although Tom Petty is no longer with us, the UK and Europe’s top Tom Petty and The Heartbreakers tribute band are keeping the music alive.

Artists join forces for a Show of Hands

A new collective of artists and makers from across the South West has been launched in Stroud.

A brand new festive take on the classic fairy tale Hansel & Gretel is coming to the Everyman Theatre in Cheltenham this Christmas.

Christmas is just around the corner and so is the annual treat that is the Cheltenham Everyman Theatre pantomime!

Auction features 100 lots from estate of 'the Queen's favourite courtier'

Chorley’s Auctioneers are delighted to announce details of their next auction, which has a focus on fine art & antiques and jewellery & silver.

Coffee morning to get into the Christmas spirit

An Advent coffee morning is being held at a Cheltenham church this month to raise money for Linc, the Leukemia and Intensive Chemotherapy Fund.

The smash-hit musical Rock of Ages is coming to Cheltenham next week - and the party is gonna be bigger than ever!

Gloucestershire-based Giffords Circus has announced the name for its 2022 show, ¡Carpa!

There's still time to grab a ticket to see The Wurzels at Stroud Subscription Rooms next week.

A spectacle of light and sound launches at Tewkesbury Abbey

First Bewick's swan of the winter arrives at WWT Slimbridge

The first of the Bewick’s swans has arrived at WWT Slimbridge Wetland Centre, Gloucestershire, on Saturday (October 30).

The social darts phenomenon that is delivering unexpected, ridiculous joy across the nation has announced its next opening in 2022.

Fans of The Carpenters will be on top of the world to hear a beautiful stage show is coming to Cheltenham Town Hall this later month.

Celebrating 30 years at the Bacon Theatre!

Schoolchildren join in the Tewkesbury Festival of Lights celebrations

Almost 200 Tewkesbury schoolchildren have been making glowing lanterns which will adorn Tewkesbury Abbey grounds during the Tewkesbury Festival of Lights this week.

The Barn Theatre and Cirencester Town Council are working together to bring some early Christmas cheer to the community.

Farmyard fun for children to enjoy

A family favourite based on a farmyard is being performed at the Everyman Theatre in Cheltenham this week.

Gloucestershire home to 'spookiest place in the UK'

St Briavels Castle in the Forest of Dean has been named the spookiest place to visit in the UK.

Stroud Valleys Project and the Museum in the Park invite you to help create a Halloween carved pumpkin trail at the museum.

Remembering the Festival of Britain

An exhibition remembering The Festival of Britain, which took place 70 years ago, is currently running at the Court Barn Museum in Chipping Campden.