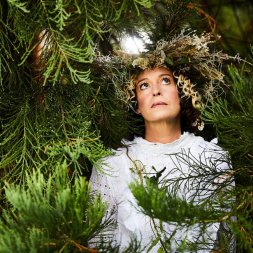 There will be plenty of Yorkshire wit and Christmas cheer as Kate Rusby and her band perform at Cheltenham Town Hall on Sunday (December 5) at 7.30pm.

Museum teams up with actor for winter trail

To celebrate the arrival of Rusty the Iron Age dog, the Corinium Museum at Cirencester has partnered with actor, comedian and children’s author Ben Miller for a trail around the museum.

After Storm Arwen forced Adam Henson’s Cotswold Farm Park to reschedule the launch of this year’s Enchanted Light Trail, the team are anticipating the opening of this year’s light trail tonight (Friday).

'The Godfather of Black British photography' will be among those joining a conversation at the Museum of Gloucester on Saturday (December 4).

Stroud gearing up for Goodwill Eve

Stroud is holding its Goodwill Evening on Friday (December 3) with a procession, street entertainment, late night shopping and Christmas markets.

Wychwood Festival is set to return to Cheltenham Racecourse next June and some great artists have just been announced for the Sunday.

Pianist steps into the breach for recital

A young pianist is stepping in to give a performance at a Cheltenham venue after the original pianist was incapacitated.

Christmas has come early for a theatre in Gloucestershire, in the shape of a brand new pantomime by a BAFTA-winning scriptwriter.

Santa will be bringing Christmas cheer to Cheltenham next month as he invites Gloucestershire children to meet him at John Lewis & Partners Cheltenham, in support of Sue Ryder Leckhampton Court Hospice.

A collective of seven Gloucestershire artists have had a busy year and will have their work on show twice more before Christmas.

Panto is jam-packed with local talent

It's been a long time coming but finally the great Christmas tradition of the pantomime is BACK!

An extra three days have been added to Sudeley Castle's Spectacle of Light.

'LLB' set for biggest role of his career in Cheltenham!

Longfield Community Hospice in Minchinhampton is inviting local residents to take part in its annual Reindeer Romp event, at Stratford Park in Stroud on Sunday, 12 December.

Winter Glow is preparing to launch a brand-new winter wonderland this Christmas at the Three Counties Showground in Malvern.