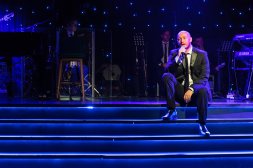 Cirencester’s Ingleside House welcomes two stars of the musical theatre world to its pavilion for two nights on Friday and Saturday (December 17 and 18).

Santa switches sleigh for a festive boat in Gloucester

A tribute to arguably the greatest rock band in the world is coming to Cheltenham's Bacon Theatre on Saturday, December 18.

A café and bistro situated in the shadow of Gloucester Cathedral is gaining a reputation for its friendly welcome and home-cooked fare under its new proprietor.

Get involved in Glevum Green Christmas craft and bake off event

Have you visited this spectacular building at night? If not, then now is the perfect time to come and experience the beauty and wonder of the Cathedral after dark.

Local artists from the Tetbury area are showing off their skills in an exhibition at Tetbury Goods Shed.

Crafts and carols at the Museum in the Park

Stroud's Museum in the Park will be getting all festive on its last day of opening before its month-long 'deep clean'.

One of the most celebrated pubs in Stroud is all set to welcome back their ‘Unusual Carol Singers’ on Sunday (December 12).

Scale the heights for charity on Christmas Day

High-spirited adventure awaits as The Warehouse Climbing Centre in Gloucester opens its doors again for festive fun on Christmas Day.

Buddy Holly is back for Christmas!

Join Buddy Holly and the Cricketers as they delight audiences with their dynamic show that always has audiences dancing in the aisles!

Johnny Coppin: All on a Winter's Night

There will be plenty of Yorkshire wit and Christmas cheer as Kate Rusby and her band perform at Cheltenham Town Hall on Sunday (December 5) at 7.30pm.

Museum teams up with actor for winter trail

To celebrate the arrival of Rusty the Iron Age dog, the Corinium Museum at Cirencester has partnered with actor, comedian and children’s author Ben Miller for a trail around the museum.

After Storm Arwen forced Adam Henson’s Cotswold Farm Park to reschedule the launch of this year’s Enchanted Light Trail, the team are anticipating the opening of this year’s light trail tonight (Friday).

'The Godfather of Black British photography' will be among those joining a conversation at the Museum of Gloucester on Saturday (December 4).

Stroud gearing up for Goodwill Eve

Stroud is holding its Goodwill Evening on Friday (December 3) with a procession, street entertainment, late night shopping and Christmas markets.