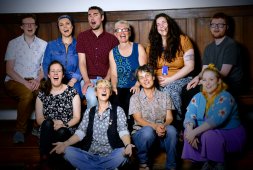 Kimmy to inspire next young musician of the year

Gifted Kimmy Kwok will be inspiring a new generation of violinists when she launches the 2023 Gloucestershire Young Musician of the Year contest at her winner’s concert in Pittville Pump Room on Sunday, November 20, at 3pm.

Dynamic duo at the Watson Hall

Marla & David Celia, a talented duo, are getting set for a performance at the Watson Hall, Tewkesbury, on Friday, November 18.

The life and music of Carole King coming to Cheltenham

Get ready to ‘Feel The Earth Move’ as a brand-new production of the award-winning West End and Broadway show, 'Beautiful –The Carole King Musical', comes to Cheltenham next week.

Historic England’s Archive and the friends and colleagues of Harold Wingham have come together to celebrate the work of the pioneering aerial photographer.

A Night to Remember in Berkeley

Great start to your Christmas shopping

Get your Christmas shopping started and sorted at a FUNtastic Christmas Fair!

The GWSR is running a ’showcase’ event over the weekend of 29-30 October when the railway’s four operational steam locomotives and three heritage diesel locomotives will be operating.

A film about an astonishing story that is so jaw droppingly bizarre it can only be true, is showing at The Roses, Tewkesbury, next week.

A young adult book club based in Gloucester is looking forward to welcoming a special guest next month.

Pumpkin-headed scarecrows, new play equipment and free lunches for children are all on offer this October half term at Dyrham Park in South Gloucestershire.

A series of ten fortnightly local history workshops are to be held in the Dunrossil Centre, Gloucestershire Heritage Hub.

The Jerseys set for memorable show

Join The Jerseys as they celebrate the timeless music of the 100 million album selling Frankie Valli & The Four Seasons.

Sensory skating comes to the Cotswolds

An ice-skating experience coming to the Cotswold Lakes will be one of the first in the country to offer sensory skating.

TV dinosaur detectives will be on hand to help hunt for fossils at a half-term family fun day in Gloucestershire.

Choirs set to provide a magical evening of song

Two choirs are set to bring a magical evening of song at Wycliffe College Chapel on Saturday, October 29.

A stunning charity fashion show is being held at the Queens Hotel in Cheltenham on Tuesday, October 18.

Two artists are holding a joint landscape painting exhibition at Spring in Cheltenham from 18 – 23 October.

Iconic 80s synth/pop icons Blancmange are playing in Stroud on Saturday (October 8) as part of a nationwide tour.

Channel 4’s Come Dine with Me: The Professionals winners are coming to Cheltenham tonight (Thursday, October 6) with a taste of Sri Lanka.