The Unravelling Wilburys is more than just a tribute band. They are the 'complete package', a great combination of brilliant musicianship, tongue in cheek humour and rave reviews throughout the UK.

The band play their songs in their familiar country-rock style whilst stealing a few choice numbers from The Travelling Wilburys. 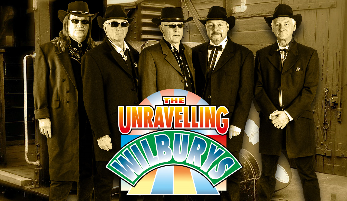 The brilliant Unravelling Wilburys are made up of Sticky Willy, Thumper, Blind Melon, Walter and Honky Tonk Wilbury, 'the real Wilbury brothers'! They grew up in Appalachian shacks and first presented their songs in Nashville back in 1987.

Their show tells the story of how their songs were stolen (allegedly) by Messrs Orbison, Harrison, Dylan, Petty and Lynne at Nashville's Tootsies Bar and the hard road they had to tread to get 'em back.