Cheltenham-based comedy improv group 'Comic Sans Script' have a remedy for the winter blues and Brexit-induced anxiety with a return to the stage at Cheltenham's Playhouse Theatre.

The group will be showcasing their latest improvised comedy show, Impro-Clash (think, Whose Line is it Anyway? but better!) where two teams resolve the dispute about which team are better via a series of quick-witted improvised games and challenges.

If their previous sell-out successes are anything to go by, their new show will have you and all the family laughing your way through the rest of the year with their hilarious, original material.

Director Richard Fallon (co-founder of Cambridge Impronauts, UK Improv Smackdown finalist) will expertly host the evening - whilst captains Bruce 'always a crowd pleaser' Kuk and Michael 'Brit-school alumni' Julien-Black lead their teams in an epic comedic battle that will be talked of for generations to come!

The one-night only show will take place on Saturday, February 16, at 7.30pm. Tickets are £8 and available from the Playhouse Theatre box office on 01242 522852 or website at https://www.cheltplayhouse.org.uk/whats-on/spring-2019/impro-clash-1/  But don't leave it too late, they sell out fast. 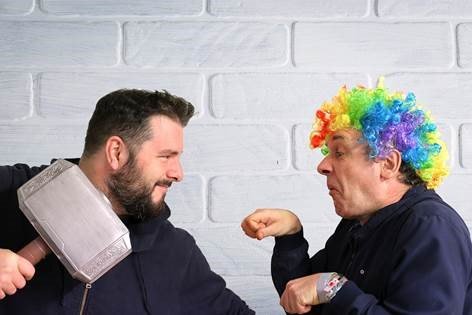 Comic Sans Script's president Damien Green said: "With improvised comedy you never know what's going to happen on the night, but that's what makes it all the more exciting, and belly-achingly funny.

"People genuinely come to the show having had the toughest weeks, and come away with the biggest smiles on their faces. That's why we do what we do.'

Comic Sans Script is an improvisation and sketch comedy group that has been entertaining Cheltenham audiences since 2013. They are a non-profit organisation founded by Richard Fallon and are currently about 40 members strong, and growing.

They have an alumni that features, stand-up comedians, comedy writers and the co-inventor of Room-101. The group hold beginners' courses four times a year, and welcome new members.