Tributes to some of the all-time greats

The Sundial Theatre in Cirencester is delighted to announce a fantastic range of tribute acts for 2022.

Tickets for four hugely anticipated acts have just gone on sale. These include MJ The Legacy; Keeping the Faith, The Billy Joel Collection; George Michael; and Nearly Elton. 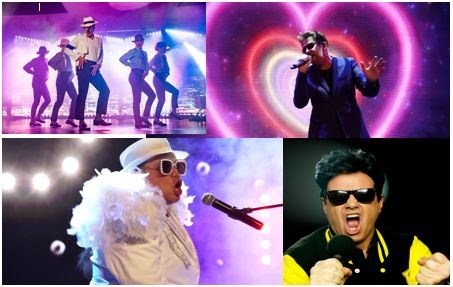 Starring CJ, MJ The Legacy comes to the Sundial Theatre on Saturday, January 22, 2022. This is an exceptionally authentic, world class tribute to Michael Jackson with his incredible live band and dancers.

The look, the voice, the moves and all the hits! This outstanding production is the closest thing to seeing a live Michael Jackson show, presenting you with an immersive theatrical experience actively engaging its audience with stunning effects and choreography from start to finish whilst recreating the music and live performances of the greatest entertainer of all time.

The show captures the electrifying energy of Michael's live performances which amazed the world for decades, bringing together superb musicians and dancers, stunning costumes, incredible live vocals and all the iconic dance routines associated so fondly with the undisputed 'King Of Pop'.

On Saturday, 30th July, 2022 Gaz Jenkins brings the passion and fire of New York's favourite son to the stage with Keeping the Faith - The Billy Joel Collection.

Billy Joel is one of the best selling music artists of all time, having sold over 150 million albums worldwide. His 12 studio albums include 33 Top 40 hits and have earned him six Grammy Awards, as well as induction into the Rock and Roll Hall of Fame.

Keeping The Faith is a collection of Billy's greatest hits, including Just The Way You Are, Uptown Girl, Tell Her About It, River Of Dreams, We Didn't Start The Fire,My Life, She's Always A Woman, and the ever-popular,Piano Man.

Gaz has trained In musical theatre and has professional theatre credits. He is sure to ignite the audience and have them begging for more.

On Sunday, October 2, 2022, Steve Mitchell brings you his brand new theatre show - George Michael Live. This joyous new show celebrates the music of one of the most iconic and best singer songwriters of all time, the incredible George Michael.

This ultimate tribute concert features a full live band and is a heartfelt and authentic tribute that takes audiences on a musical journey of George's greatest hits and high energy Wham tracks. The show is based on George's 25 Live tour and audiences are treated to stunning musical arrangements and exciting versions of songs such as Fastlove, Faith, Careless Whisper, Outside and Freedom.

On Thursday, 24th November 2022, you can experience the ultimate Elton John tribute concert. Nearly Elton is a stunning celebration of the music and life of one of the greatest showmen of our time.

Starring Lee Brady as Elton and an outstanding full live band, this phenomenal production is an outstanding concert that has been described as "a powerhouse performance that delivers on every level..."

Taking audiences on a magical ride through five decades of hits that include: Rocket Man, Your Song, I'm Still Standing, Candle In The Wind, Sacrifice, I Guess That's Why They Call It The Blues and many more.

For tickets to all these gigs, go to ﻿﻿Sundial Theatre