Star of Live at the Apollo and Comedy Central at The Comedy Store, multi-award-winning comedian Chris McCausland is bringing his smash hit Edinburgh Fringe show, Speaky Blinder, to Gloucester as part of his debut national tour. 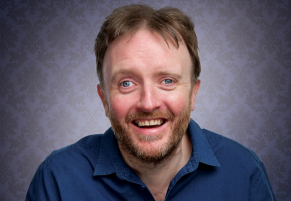 From hilarious tales of the marathon birth from hell that Chris and his wife thought would never end, and their experience of having to pay actual money to a mad lactation consultant (yes that's a real job), to the numerous and inevitable conflicts that arise when a pasty white Scouser is married to a hot-blooded Brazilian woman, Speaky Blinder delivers more razor sharp observations from one of the circuit's best-loved and most prolific stand ups.

Chris also gives an insight into life and parenthood in the dark, from his inevitable shortcomings as a husband who can't do his share of the driving to the total farce of playing hide and seek when you can't see where to hide or even where to do the seeking!

A proper stand-up show with a real unique perspective on life and relationships, Speaky Blinder will definitely leave you thinking as well as laughing!

Chris is a comedian and actor who made his comedy debut in 2003 and is currently the only professional comedian in the world who is blind.

Chris has taken seven acclaimed shows up to the Edinburgh Fringe, and was awarded the Creative Diversity Award for Comedy by a panel of broadcasters including Channel 4, BBC, ITV and Sky.

As a comedian, in 2018 Chris made his debut on Live at the Apollo (BBC2), and, previous to this, appeared in three series of At the Comedy Store (Comedy Central), as well as Stand-up Hero (ITV) and Celebrity Deal or No Deal Comedians Special (C4).

As an actor he has just recently appeared in EastEnders (BBC1), and has also had a lead role in Jimmy McGovern's Moving On (BBC1), Unwrapped with Miranda Hart (BBC2), and played the role of 'Rudy' the market trader in 150 episodes of the children's show Me Too (Cbeebies).

He has made numerous appearances on radio including InTouch (BBC Radio 4), The Comedy Club (BBC Radio 4 Extra) and Loose Ends (BBC Radio 4), and has guest presented Russell Kane's The Saturday Show (Virgin Radio).

He wrote and fronted a national TV ad campaign for Barclays and regularly contributes to BBC News and Sky News.

Tickets for Chris's show at Gloucester Guildhall are £12 (£10 concessions) and are available at www.gloucesterguildhall.co.uk/live-events/2019/5/31/chris-mccausland-speaky-blinder