Where: The Centaur, Cheltenham Racecourse

Australian superstar Jason Donovan will be taking to the stage at Cheltenham Racecourse as part of a nationwide tour next year.

The popular performer will be will be headlining a spectacular show as part of the 'Even More Good Reasons' Tour in The Centaur.

Tickets are now on sale for the Cheltenham show, which is set to take place on Wednesday, September 16, 2020.

Rising to prominence in the 1980s as heart-throb Scott Robinson in Neighbours, Jason has had a career that has spanned more than three decades and seen him score Number 1 hits such as Especially For You, Too Many Broken Hearts and Sealed With A Kiss. 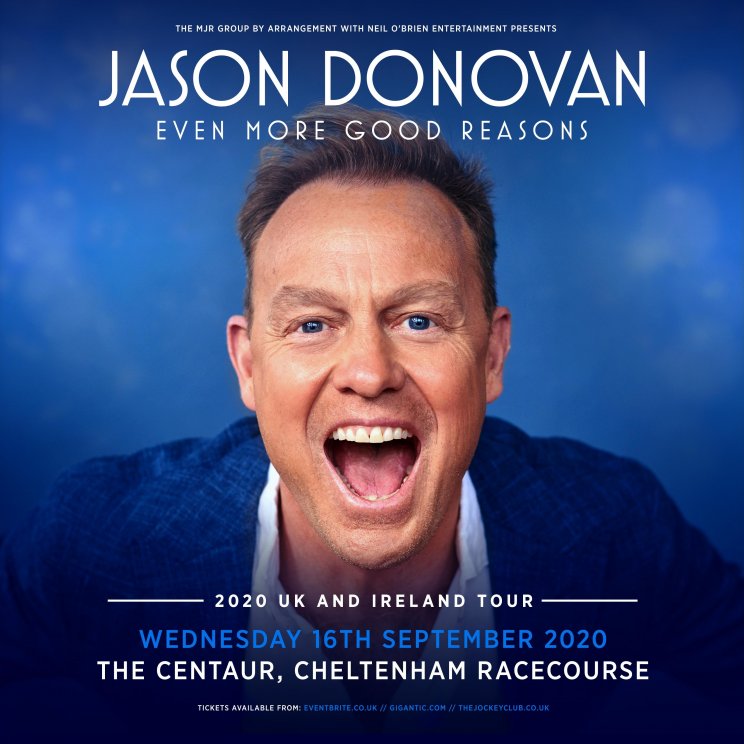 He has also had a hugely successful stage career, which has seen him star in the likes of Joseph and the Amazing Technicolour Dreamcoat, Chitty Chitty Bang Bang, Priscilla Queen of the Desert, Sweeney Todd and Jeff Wayne's War of the Worlds.

Jason also performed at the Concert For Diana, made the I'm A Celebrity and Strictly Come Dancing finals, found his Australian ancestors on Who Do You Think You Are and in 2018/19, travelled the country, completing 125 shows on his Amazing Midlife Crisis Tour including a sold-out week at the Edinburgh Fringe.

The singer's appearance comes as 2020 is shaping up to be an exciting year for the venue with a whole host of events already set to take place.

What's Love Got To Do With It? is the new show celebrating the music of Tina Turner that will be hosted by the racecourse and is set to wow fans when it heads to The Centaur on Friday, February 28.

Audiences can expect a night of high energy, feel-good rock-and-roll featuring Tina's greatest hits performed by the vocal talent of Elesha Paul Moses (Whitney - Queen of The Night, The Voice, The X Factor) supported by a full 10-piece live band.

And snooker's top stars will be returning to the racecourse next February for the Coral World Grand Prix, which was staged for the first time earlier this year.

The prestigious tournament, which brings together 32 of the world's best players, will run from February 3 to 9 in 2020.

The competition features the best 32 players on the season's money list. It is the first event in the Coral Series, with the best 16 going on to the Coral Players Championship, and then the top eight contesting the Coral Tour Championship. All three events are televised live by ITV4.

Lee Moulson, regional head of sales at Cheltenham Racecourse, says that 2020 is already shaping up to be very exciting.

"We are thrilled that Jason Donovan is coming to Cheltenham and I'm sure it is going to be a fantastic show," said Lee.

"So far, the racecourse has a number of fantastic events scheduled for next year which are very exciting and cater for all tastes and showcase the versatility of the venue.

"But there is plenty more to come next year, so keep your eyes peeled for news of more amazing events in 2020."