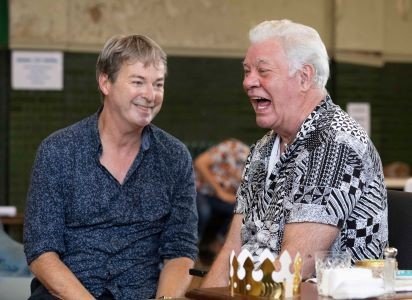 The Dresser - starring Julian Clary and Matthew Kelly - opens at the Everyman Theatre in Cheltenham later this month.

Inspired by memories of working as Donald Wolfit's dresser as a young man, Ronald Harwood's evocative, affectionate and hilarious portrait of backstage life is regarded as one of the most acclaimed dramas of modern theatre.

It is 1942 and in a war-torn provincial theatre an ageing actor-manager, known to his loyal acting company as 'Sir', is struggling to cling on to his sanity and complete his 227th performance of King Lear.

For 16 years Norman, Sir's devoted dresser, has been there to fix Sir's wig, massage his ego, remind him of his opening lines and provide the sound effects in the storm scene. It is down to Norman to ensure that - in spite of everything - the show goes on.

The Everyman Theatre Company teamed up with the Theatre Royal, Bath to create this new production which had to be halted due to the first lockdown. Now it's back and ready for a UK tour.

Chief executive of the Everyman Theatre, Mark Goucher, said: "I am delighted to be co-producing Ronnie Harwood's wonderful play with Bath Theatre Royal. Julian Clary and Matthew Kelly are great casting, and they will bring tremendous pathos to the roles of Sir and Norman, his dresser."

Julian Clary's successes encompass television, radio, films, writing and stand-up comedy which he has performed all over the world. His West End starring roles range from London Palladium pantomimes to the Boy George musical, Taboo.

Playing 'Sir' will be Matthew Kelly, winner of an Olivier Award for Of Mice and Men. His other West End credits include Waiting for Godot with Ian McKellen, Comedians and Troilus and Cressida. His many television credits include the award-winning thriller Cold Blood, Benidorm, Bleak House; Stars In Their Eyes and Moving On.

Ronald Harwood's plays include Taking Sides, Equally Divided and Quartet. His screenplay for the film of The Dresser received five Academy Award nominations, including Best Screenplay. He won an Academy Award for The Pianist.

Director Terry Johnson is a dramatist and director who has won numerous theatre awards including two Olivier Awards as a playwright for Best Comedy and a Tony Award for Best Director of a Musical for La Cage Aux Folles.

The Dresser runs at the Everyman from Tuesday, September 21, to Saturday, September 25. Book tickets on 01242 572573 or online at everymantheatre.org.uk