It was part of a 'whistle stop' tour of organisations that have benefited from government Culture Recovery Grants to help them through the recent pandemic lockdowns.

The GWSR received a stage 1 grant and expects to receive its stage 2 grant, in all totalling up to £390,000, while Dinmore Manor Locomotive Limited, which is overhauling a Great Western Railway freight locomotive at Toddington, received grants of up to just under £39,000. 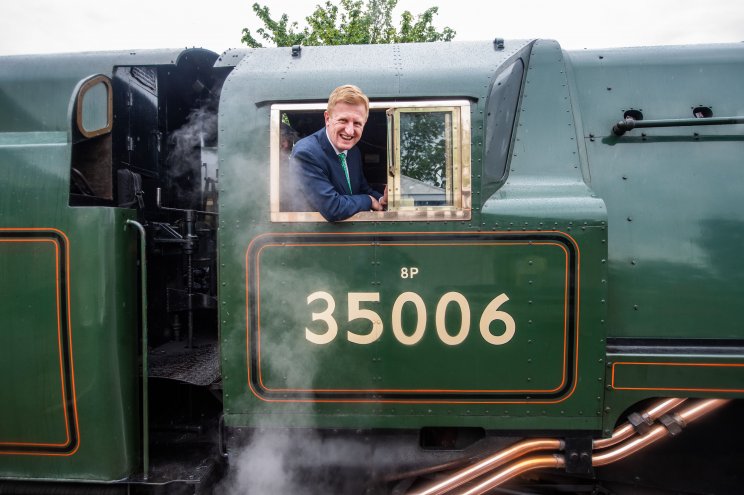 Mr Dowden met some of the railway's directors and volunteers at Toddington station. Also present were Nick de Bois, Chairman of the Visit England Advisory Board and Laurence Robertson, MP for Tewkesbury, through whose constituency the railway passes.

Mr Dowden then boarded the footplate of Merchant Navy class pacific no. 35006 Peninsular & Oriental SN Co for the short journey to Winchcombe, from where he travelled by car to Sudeley Castle. 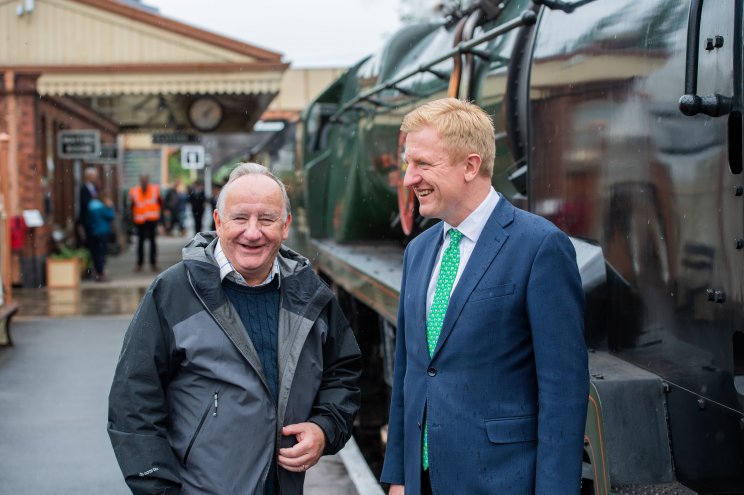 Richard Winstanley, the volunteer finance director of GWSR Plc who greeted Mr Dowden, commented: "We were delighted to welcome Oliver Dowden to the railway - it was an opportunity to thank his department for our recent Culture Recovery 'lifeline' grants.

"Indeed, without such grants replacing part of lost ticket income, organisations in the culture and tourism sector would be in serious financial difficulty. It's no exaggeration to say that without the grants, some would not have been able to carry on which would be a tragedy for Britain's rich and historic culture.

"We also drew his attention to the looming issue of lump coal supplies in the UK, on which heritage railways such as the GWSR depend. In the absence of other suitable fuels, we urge positive Government protection for heritage users of coal, including railways such as ours.

"The last coal mines in the UK are expected to close soon. This means supplies - not just for heritage operation which burns just 26,000 tonnes per year of the estimated 9.5m tonnes of coal still consumed by industry in the UK - will have to be imported from as far away as Russia and Australia with the considerable carbon footprint and cost that implies."

Mr Dowden was clearly impressed by his experience on the footplate of one of the most powerful express steam locomotives currently operating in the UK, staying longer than was allocated for his busy schedule.

"I believe that Mr Dowden was excited with what he saw and went away with a clear appreciation of the vital role that organisations like the GWSR play in their local tourist economy, and in keeping local history alive."