An amateur chamber choir is bringing a programme of Christmas music to the glorious setting of St Peter's Church, Winchcombe, on Saturday evening. 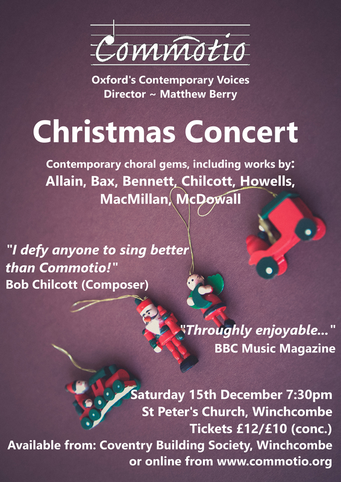 Oxford-based Commotio was founded in 1999 and performs contemporary choral music primarily from the 20th and 21st centuries showcasing works by younger or lesser-known composers.

The choir is particularly recognised for its fine tuning, attention to detail and challenging repertoire. The name Commotio derives from the Latin for movement/excitement.

Commotio's CD, A Rose in the Middle of Winter, got to number one in the Specialist Classical Charts in 2013, and another, All Good Things, reached number 11 in the Jazz Charts in 2017.

Tickets cost £12 (£10 concessions) and are available from the Coventry Building Society on Abbey Terrace, Winchcombe, or online at www.commotio.org/store/p26/19%3A30%2C_15th_December_2018.html