The skies above the Royal International Air Tattoo in Gloucestershire are set to turn red, white and green as the Italian Air Force returns to delight spectators with exhilarating flying displays.

Flying on Saturday 20 and Sunday 21 July, the Italian Air Force's Frecce Tricolori Display Team are out to defend their reputation of being one of the most awe-inspiring and enjoyable display teams to watch. 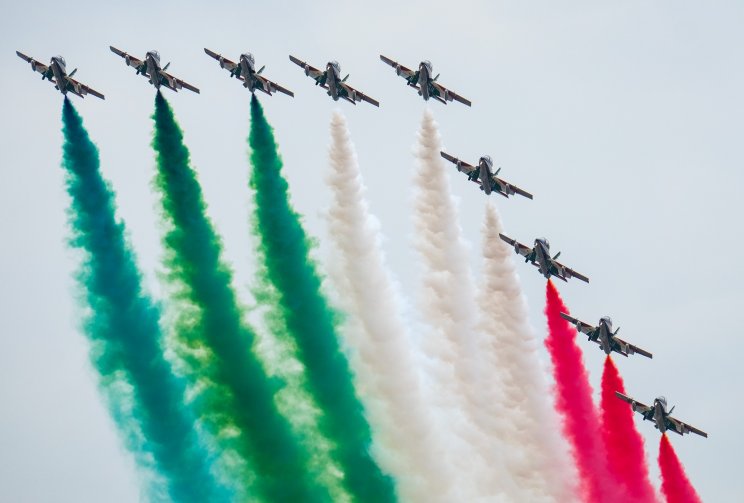 Also known as the Three-coloured Arrows, the team - which is made up of 10 two-seat fighter Aermacchi MB-339-A/PANs - is the largest aerobatic line-up in Europe.

Helen Webb, head of marketing for the Air Tattoo, said: "Our friends from the Italian Air Force are once again showing fantastic support for the show and we are extremely grateful that they are providing four acts for the flying display.

"Our visitors love the colourful Frecce Tricolori and my personal favourite; the magnificent C-27J display, is just jaw dropping!"

Also in the air visitors can also see the last UK display from the RAF Red Arrows before they head off on their North American tour as well as a special NATO 70th anniversary flypast.

On the ground, the Air Tattoo boasts an impressive static display including the Austrian C-130K Hercules, two of the Belgian Air Force's F-16AMs, the Hungarian Air Force's JAS-39 Gripen and The Royal Canadian Air Force's CP-140 Aurora and CC-139 Hercules.

Elsewhere, Starchaser Industries' Nova 2 rocket and space technology firm Skyrora's Black Arrow - the UK's only rocket to successfully launch a satellite into orbit, are on display for up-close viewing in the critically-acclaimed TechnoZone®.

Other showground attractions include the Activity Zone, Vintage Village and RAF Experience.

Tickets for the airshow (19-21 July) which is staged annually in support of the RAF Charitable Trust, can be bought via the Air Tattoo website. All accompanied under-18s go free.