A special visitor on the tracks to the Forest

This Saturday (July 6), the Dean Forest Railway will receive a rather special train on its tracks, travelling on a 403-mile round trip from Hastings for a Dean Forest Foray.

Fully booked, it will carry 276 visitors and is due to arrive at 13.30. After a tour of the line to Norchard and Parkend, it leaves Lydney Junction at 17.30.

The train will also call at Gloucester at 12.45 and 18.04. This means passengers from the South-East can explore the city for five hours and that a limited number of new passengers can board, for the experience of travelling from Gloucester non-stop on to the DFR tracks. 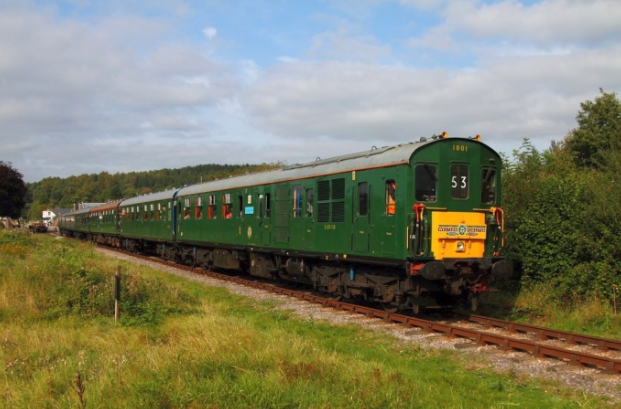 The Hastings DEMUs were built with narrower-than-normal bodies in 1957-58. This was to cope with Victorian tunnels on the line from Tunbridge Wells which had been built so cheaply that they needed lining with so much brickwork that they were too narrow for conventional rolling stock.

A special fleet of carriages had always been required for steam haulage and the Hastings DEMUs continued this tradition. These six-car DEMUs were unique to the Southern Region of British Railways which was more or less wholly electrified.

The Hastings DEMU, with its sell-out dining tours, is always a popular sight and was last seen on the Dean Forest Railway on September 12, 2012.

The train includes club and standard class accommodation with a buffet car and will be travelling to the Forest via Tonbridge, Redhill, Guildford and Reading to

Swindon, onwards through Kemble and Stroud to Gloucester before continuing to join the DFR's tracks at Lydney junction.

The chairman of the Dean Forest Railway Society, Alastair Clarke, said: "Our railway's mainline connection at Lydney Junction has always meant that we have been able to receive charter tours and special trains on to our tracks.

"Next year we celebrate our 50th anniversary so we are certainly expecting to see some more crowd-pulling visiting trains in 2020. Watch this space!"