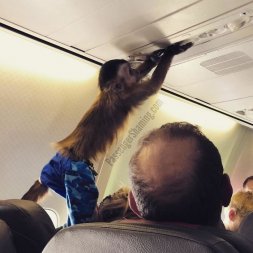 A far from perfect flight

What’s the most unusual or bizarre thing you’ve seen whilst traveling?

These outfits would only be found at Walmart.

It's national #BubbleBathDay, so we have found some funny bath bombs to add to your bathtub with homemade creations and cool designs that are ideal for personalised gifts.

Our feline friends have a real sense of adventure and mischief.

Ten people having a worse January than you

Christmas is done and dusted for another year and the January blues have set in.

Not your average selfie

Selfies don't have to be boring. This Instagrammer has decided to be different.

This artist has mastered the art of transforming snack boxes into incredible pieces of art.

Warning: Not for the eyes of younger readers

Creative Christmas trees with a difference

People across the world are finding new creative ways to deck their halls.

The art of camouflage

This artist creates artwork she can quite literally disappear into.

Christmas inspires people to be creative and design new traditions.

The gift you never expected

A company in America produce hilarious fake gift boxes to fool your friends.

We’ve found a bunch of people with names that perfectly match their jobs.

'Elf On The Shelf' taken to the next level

A modern Christmas tradition is taking the world by storm.

This artist from Germany decided to experiment with x-ray equipment to delve deeper into the world of flowers.

Dogs, do they love us or just tolerate us?

App of the week: Google Translate

Are you communicating with clients and customers across the world on a daily basis?

How would you react to spotting one of these on the shelves of your local store?

The life of an extraordinary hedgehog

Who knew the all-consuming agony husbands and boyfriends endure when they go shopping with their significant others.

Christmas is the perfect time to begin a new tradition from building something creative with just three and a half weeks to go...

You definitely don’t want to cross paths with these people.

Raising kids can sometimes be tough, but these tips might help to make it that little bit easier and less stressful.

Satellite images provide a different perspective of planet earth and the world that we live in.

Christmas is widely regarded as the most wonderful time of the year but it can also be the most stressful.

If you enjoyed our Perfect alignment feature, here are a few more photos to enjoy...

The biggest dog of them all

It's rare that things fit together so perfectly.

Here are some of the best tweets from dog owners around the world in 2017.

Designs that should never have been approved

Anyone would wonder how these designs got through production.

Sometimes, all the pieces don’t have to fit.

A man found an injured cat wandering the streets of London with a rather unique trait.

These people have flipped family photos on their head and got creative by recreating them years later.

This artist has creepified some of the most well-known childhood cartoon icons into terrifying monsters.

A compromise was reached

Some people and their pets like to always get their way, this is what happens when they don't.

If you like gripping psychological crime thrillers, then this should be your next read.

We’ve found some of the worst things seen during structural inspections.

We found a collection of maps that are so bad, they’re good.