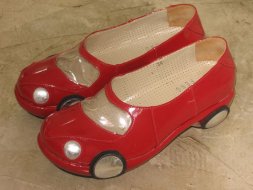 Are you on the lookout for a new pair of shoes? Why buy something sensible when you could own a pair of these!

A man from Moreton-in-Marsh stops by a cafe for breakfast. After paying the tab, he checks his pockets and leaves his tip--three pennies.

The Eagle and the Rabbit

An eagle was sitting on a tree resting, doing nothing.

Tom had terrible trouble getting up in the morning and was always late for work. His boss was mad at him...

Fashion brands struggling to sell their expensive clothes are branding more merchandise with their famous labels; including a variety of homeware items and exclusive accessories.

A company, feeling it was time for a shake-up, hires a new CEO...

Some dreamy destinations from all over the world, you'll wish you could hang around in them all year round.

If you're off to America on holiday, be sure to keep clear of Walmart! Unless you would like to see more of these...

A father attempted to explain ethics to his son, who was planning to go into business...

Animals have mastered the art of photobombing, with a little help from their human friends.

A man was taking his wife, who was pregnant with twins, to the hospital when his car went out of control and crashed.

With all the recent heavy rain reminding us of the floods 10 years ago, we hope it doesn't get this bad!

It's raining, it's pouring!

How often does it rain in England?

Keep a lookout this summer for rare sealife. Some of them are pretty, some are scary and some are simply strange but they're all fun to look at.

When staying in a seaside hotel, a couple was waiting in the breakfast room to be served...

Several weeks after a young man had been hired in Hempsted; he was called into the Human Resources office...

Have you heard of pareidolia?

We've all heard of seeing the likeness of Jesus in a slice of toast; but some of these might just make you reconsider believing in reincarnation.

A range of opticians jokes, you'll be glad to see.

This marketing strategy is unlikely to boost sales but will entertain your customers.

Heading down to the beach this Summer? Look out for some of these!

It's so hot today, we wish we could peel a layer off, like these fruit.

These are hilarious! Would you do this to your dog?

During the economy crisis two local businessmen from Cirencester had a little chat about how much they should be paying their employees...

The patient was terrified about going to the dentist. He managed to avoid going except for his standing annual appointment so in an effort to ease his nerves, he attempted to strike a conversation...

Panorama shots are an opportunity to capture wider shots of momentus occassion but have the capability to be disastrous or magnificent, depending on your perception.

Reaching the end of a job interview, the Human Resources Officer of a company in Cheltenham asks a young engineer fresh out of University, "And what starting salary are you looking for?"

A man went to an eye specialist to get his eyes tested.
"Doctor, will I be able to read after wearing glasses?" He asked.

It's National Blueberry Muffin Day so we have some punchlines based around food for every kind of chef; the amateur, the novice, the apprentice and the expert.

Seven of the most quirky restaurant servings we have ever seen...

While visiting a friend in hospital, a young man notices several pretty nurses, each one of them wearing a pin designed to look like an apple.

How did they do that? Without eating it all!

A linguistics lecturer in Herefordshire was lecturing his class...

What does DIET stand for?

It's National Fried Chicken Day which has led Punchline down a narrow path of finding some tasty morsels for you to sink your teeth in.