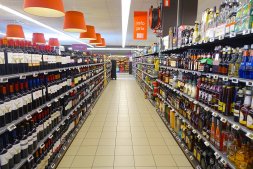 A new supermarket opened near my house.

It's the thought that counts, right?

Going to the Lecture

An elderly man is stopped by the police around 2 a.m. and is asked where he is going at this time of night.

These just show how time flies by,..

You might see a dirty car, but this Russian artist sees something more...

How do you describe a dyslexic, agnostic insomniac?

Animals of the internet

The most viral adorable animals.

19 per cent of children say they've made themselves ill by eating too much chocolate over the Easter holidays.

How do you know the Easter Bunny is really smart?

The book selection of the week is chosen by Katharine Seymour, Bookshop Manager at Waterstones Gloucester.

When my three-year-old son opened the birthday gift from his grandmother, he discovered a water pistol.

Irony at its finest...

In the 13th century, some people in Norway would baptize their children with beer.

This is what happens when you let others look after your furry babies.

Too chilled to care.

A mother and a baby camel were talking one day.

Photos to make your fist clench...

A doctor goes out and buys the best car on the market, a brand new Ferrari.

The problem with drinking

We all make mistakes...

A man went to a psychiatrist for his phobia.

Pictures to make you panic

These images may ruin your Friday...sorry!

A man is dining in a fancy restaurant, and there is a gorgeous lady sitting at the next table.

Don't let anyone ever tell you that romance is dead!

Two guys are walking through a forest looking for deer.

It's easy to forget how difficult some of us find using technology...

Sherlock Holmes and Dr. Watson went on a camping trip.

A little old lady answered a knock on the door one day, only to be confronted by a well-dressed young man carrying a vacuum cleaner.

There are three varieties of grapes gathered in this blend.

Why women live longer than men

It's not hard to believe when you see these pictures...

If it seems too good to be true, it probably is...

A man was talking to his neighbour.

And this is why we love them so much.

A new business was opening and one of the owners’ friends sent flowers for the occasion.

The funny thing about the gym...