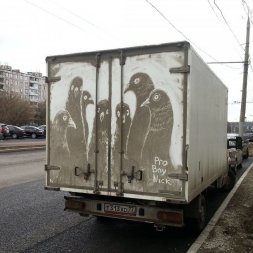 Art can be created anywhere, even in the dirt!

Just thought you would all like to know about my up and coming travel plans for the holidays.

Fun on the subway

Its alright to be different.

One day a businessman went to a pet shop to buy a parrot.

Some of these ice creams will make you very hungry.

I Took a Day Off

What was the harm?

App of the week: My Data Manager

Looking for ways to save money? Keep tabs on your mobile data spend with My Data Manager.

The Art of Tents

These tents are out of ordinary - they make camping fun.

Summer has really hit this week, so be prepared for what you might see at the beach!

When the sun is shining, animals like to wear shades.

What's the best way to make a small fortune in the stock market?

A dive into the some cool and funny canoe pictures to celebrate National Canoe Day!

A shopkeeper from Newent was dismayed when a business much like his opened next door.

Some funny ways of fans showing their support for England.

My boss asked me to make a presentation, he recommended that I start with a joke.

These photos will definitely make you look twice.

An older couple had just learned how to send text messages on their new smartphones.

Pizza's have evolved over the years.

When I got to work this morning, my manager stormed over to my desk.

We're halfway through the week, are you already counting down to the weekend?

A funny side to stock photos

This artist decided to have some fun with the most boring stock photos on the internet.

Working in an industry where the customer is always right isn't as easy as you think.

Life as a stay-at-home dad

These are some of the most honest and hilarious post-it notes that sum up the task of parenting.

Nothing stirs up regret quite like a bad tattoo.

A 34-year-old man from Bristol has been arrested following a failed attempt to rob Lloyds in Gloucester.

Its time we celebrated the heroes that make us laugh out loud.

App of the week: Instapaper

Ever found something really informative and interesting when browsing the web but don't have time to sit down and read it? Save it for later with Instapaper.

Always let your boss have the first say

A sales rep, an administration clerk, and the manager were walking to lunch through Tetbury when they found an antique oil lamp dumped on the side of the road.

Don't judge a book by its cover.

Saving money when washing up

John went to visit his 90 year old grandfather in a very secluded, rural area of Gloucestershire.

Are rules there to be broken?

I want to take my money to the afterlife

There was once a man, who had worked all his life in Gloucester, had saved all his money, and was a real miser when it came to his money.

Parents with a sense of humour

These parents have humour by the bucketload.

Right place at the right time

Sometimes you don’t have to be a good photographer to take an awesome photo.

This street artist has taken the boring streets of New York and used a lick of paint to create something rather special.

Fired on my first day at work

After weeks of training to be a cashier at a bank in Gloucester, today was my first shift.

We have found the funniest definitions kids have in their vocabularies, and they're better than an adult's will ever be.

Late for the exam

At The Crypt School in Gloucester, four bright A-level students were so confident in their grades, that instead of revising the weekend before their maths exam they went to a friend’s party in London.

You only get out what you put in

Unsurprisingly, when these people didn’t try they failed miserably.