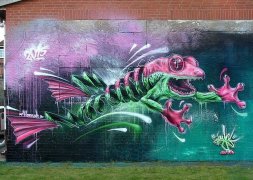 This German designer has created some inspirational street art with a mechanical twist.

Today's technology taken back to the 1980s

This creative art director has transformed technologies we have today back in time.

This artist has an unusual hobby of creating exquisite sculptures crafted out of old cutlery.

Punchline have found some pumpkins that cut to the very core of human existence.

We’ve all had some embarrassing moments when it comes to clothing choice.

It's National Cat Day, encouraging cat lovers to celebrate the cats in their lives for the unconditional love and companionship that they bestow upon them.

Punchline have found a fascinating way to look at wildlife during the Halloween season.

This half-term week, we expect the parents, grandparents, aunts and uncles among our readers will be receiving lots of drawings from the little ones as they occupy themselves with hours of playtime.

We found some of the best copy-cat Halloween looks to spook out your friends.

Halloween is just one week away, have you decided this year's costume?

The older generation can provide wisdom, as well as occasional humour.

Who knew your old, smelly mattress could be turned into something that looked so tasty.

Sometimes, children are oblivious to how funny they actually are.

When you understand the laws of nature and physics, you can find the perfect balance and create something wicked.

What would life be like in a microscopic world?

When you stop searching, you sometimes make the best discoveries.

International day of the girl

It's international day of the girl, so we have compiled some funny tweets about having a daughter.

These people and animals matched their surrounds too well.

Embarrasing you in public, using sound logical reasoning, performing odd acts and using puppy dog eyes to get a puppy of their own are just a few of the things that make children entertaining.

Hospital can be a fun place too

You might rarely look forward to visiting the hospital – but sometimes it can be a rather funny experience.

We compiled a list of embarrassing moments and jokes from dads across the internet.

Photoshop can be used to create some rather unusual animals.

We have fun mascots in Gloucestershire including the Stagecoach West Easter bunny and the Pied Piper Appeal's 'Boulder' the bear.

Everyone needs some humour in the workplace to brighten up their day.

Would you work for free?

You wouldn’t walk into a restaurant and demand a free meal, so why should art be any different?

Innovation and imagination are placing countries years ahead.

These pets are definitely in the doghouse for their misdeeds.

Twenty people that are having a worse day than you

Thought you were having a bad day? Maybe this will change your mind.

Optical illusions can appear in the most unusual places.

3D creatures roaming the streets, what could be worse?

“They grow up so fast” taken to another level.

A doctor and a lawyer are talking at a networking event.

Animals can have a better sense of humour than humans.

App of the week: ColorNote

Ever have too many to-do lists? Task management on your smartphone might be key to staying organised.

When you miss the joke so badly, that you become the joke.

The following photos may make you question everything and are disturbingly unassuming.