Punchline Talks took a bit of extra care about its appearance this morning as it welcomed the latest guest into the hot seat for the B!G interview.

Stephen Shortt, founder of natural men's grooming company Hawkins & Brimble, joined Punchline-Gloucester.com editor Mark Owen to talk about how the company has grown to a turnover of more than £3million and exporting around the world since it formed in 2016.

He talks about the changing face of men's grooming and finding a gap in the market, plus the natural ingredients which are used in the company's products and how they are developed.

And, as ever in the Punchline Talks hot seat, he shares his top three business tips, plus much more.

Subscribe to the Punchline daily newsletter to be among the first to see the Punchline Talks videos as more leading business figures take their place in the hot seat in the coming weeks. 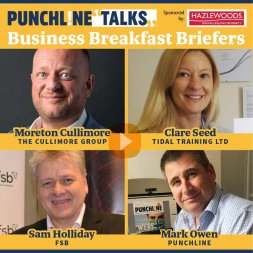