The key to business success is having the confidence to ask questions according to a leading Gloucestershire entrepreneur.

James Horwood, co-owner of Kitchen Garden Foods, said he learned to push the boundaries and challenge himself.

The businessman, along with James Moinet, runs the highly successful artisan jam and marmalade firm in Stroud, with around 15 employees.

He said he'd left school with a handful of qualifications but knew he always wanted to work and thrive in a business environment..

He started a career in sales but seized on the chance to work alongside Kitchen Garden Foods founder Barbara Moinet a few years ago.

Barbara, who has since passed away from cancer, began the business by making jams in her kitchen using fruit picked from nearby hedgerows.

She soon expanded into local farmers markets and before long into independent delicatessens.

These days the company has a raft of luxury products including pickles and marmalades, and can be found on the shelves of top retailers.

James said he'd learned that in business, sometimes it was about following instinct and doing the right thing.

The company has introduced its Wolfeys porridge brand - which comes complete with s little pot of jam - to acclaimed success and its now featured on GWR trains and British Airways.

And James and James have been working on a new product called NAFF - which are colourful brand of rubs.

Business is booming despite the impact of the pandemic which resulted in all of the staff being furloughed, and an all hands to the deck approach to keep the business and suppliers happy.

Make sure you do not miss any of the Punchline Talks B!G Interviews by subscribing to the daily newsletter. 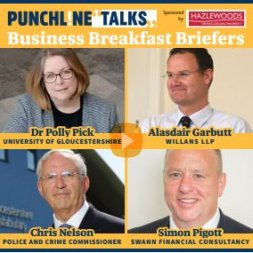