Julie Kent MBE has so many job titles that it is difficult to know where to start - so that's what Mark Owen, editor of Punchline-Gloucester.com decided to do in this entertaining and inspiring run through of Julie's life.

Julie Kent, is a professional musician, a former teacher and housemistress at Dean Close School in 2021 she was recognised in the Queen's Birthday Honours Lists for her outstanding service to their community.

Julie became involved in charity work in 1994 after she lost their first daughter Emily at just three years old to a brain tumour. Along with her husband Bernard, she set up The Emily Kent Charitable Trust to raise money for anaesthetic equipment for the scanner at the Bristol Royal Infirmary.

The charity continued to raise thousands of pounds to buy equipment for children with cancer in Gloucestershire, donating £50,000 to the Pied Piper Appeal for the new children's hospital which is now home to the Emily Kent Unit. It also raised £50,000 for the Bristol Royal Hospital for Children, where the day care unit was named after Emily until recently.

After closing the Emily Kent Charitable Trust, Julie moved on to raise money for charities including CLIC Sargent and the Teenage Cancer Trust.

In 2014 she joined the Pied Piper Appeal where she is now the Vice Chair; she is also a Trustee for Goals Beyond Grass and a Junior Warden at the Honourable Company of Gloucestershire.

In 2020, Julie joined Cheltenham Open Door as chair and is spearheading the charity through one of its most challenging years to date. 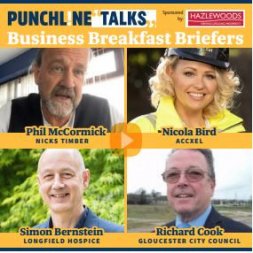