Eight-year-old twins Mina and Rohan Stoten have teamed up with their local pub to sell their own apple juice to raise much-needed funds for their primary school.

When the entrepreneurial brother and sister heard that North Cerney Primary School would be unable to put on its Christmas fair this year due to the Covid pandemic, they thought of another way of selling their own product and wrote a letter Bathurst Arms landlord, Jordan Pelly. 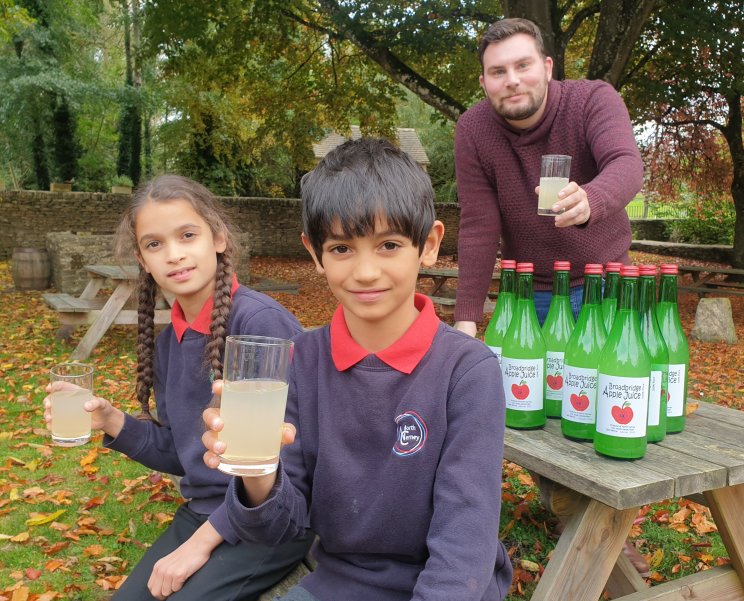 Jordan said: "I received this delightful letter in the post from Mina and Rohan, offering me their super apple juice to sell in the pub and was more than happy to help. I am setting up a little deli-style shop in the pub and thought their product would fit in really well. You cannot get more locally-sourced, as the children's orchard and home is just quarter of a mile away."

Mina and Rohen help their parents pick over a tonne of apples a year in windfall, as well as climbing the trees to shake branches. The Bathurst Arms will be selling half a tonne of pressed apple juice, with all proceeds going to North Cerney Primary School.

The orchard itself comprises of various apple varieties, including cookers, eaters and cider apples. Most trees were planted in the early part of the last century, and owned for six generations by the same family, until the Stoten family bought the property in 2010.

Jordan said: "We will be using some of the apple juice to accompany breakfasts for our guests, I have also asked chef Michal Wlodarcyk if we can come up with any recipes as well, as we like to use local wherever we can. We already use some of the excess fruit and vegetables from the North Cerney allotments, so having another food source in the village is great."

For more information or to book a table please call 01285 832150 or email: info@bathurstarms.co.uk