Teams of Gloucestershire pupils have done battle in defence giant Raytheon's fifth annual Quadcopter Challenge regional final, under the theme of Technology around the World.

The eight teams from Gloucester were tasked with technology from Germany, and teams were also assessed on the creativity of their designs.

Raytheon STEM ambassadors mentored the teams throughout the competition, visiting schools, hosting workshops and guiding pupils on how to improve the aerodynamics and control of the quadcopters.

Following a close fought contest, 181 Squadron Gloucester Air Cadets was crowned winner and will compete in the grand final at RAF Cosford Museum. 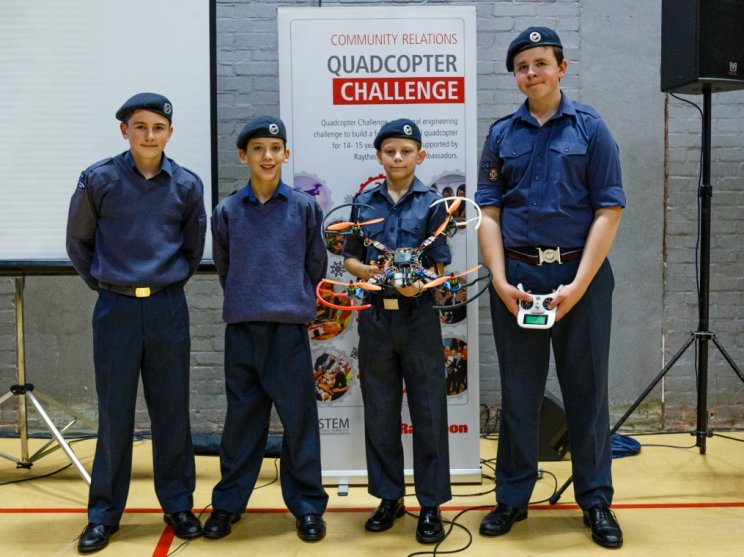 Ben, Civilian instructor of 181 Squadron Gloucester Air Cadets, added: "The Quadcopter Challenge has been a fantastic learning opportunity for the cadets, giving young people the ability to take control in their own project, and giving them the chance to build upon their skills on the principles of flight by constructing and competing with their own quadcopter.

"The STEM ambassador has been instrumental in the cadet's participation in the challenge, taking time out to advise and encourage the cadets who have been involved.

"The cadets have become fully engaged in the challenge, having been given the ability to lead the project themselves and really get hands-on with this STEM activity."

Joss Benyon, STEM lead for Raytheon in Gloucester, which has a major office at barnwood and has close links to the county's cyber community and GCHQ, said: "Congratulations to 181 Squadron Gloucester Air Cadets, and to all who took part. Like many other STEM ambassadors, I got involved to inspire the next generation of engineers, scientists, mathematicians and teachers.

"It's fantastic how this competition has grown from a pilot in Essex to a national competition with more than 400 students taking part each year.

"Events like this are so important to encourage young people to take part and learn new skills, and to have the opportunity ask questions about future careers and jobs within the STEM field."

More than 80 teams of pupils and cadets participated in the UK-wide challenge, which teaches pupils how to build a fully-functioning, four-bladed, multi-rotor, remotely piloted air system - commonly known as a quadcopter.

Pupils then competed in a series of challenging flying tasks that test skills including accuracy, innovation and agility.

Each region across the UK was assigned a different country around which to theme their quadcopters and team members gave a 10-minute presentation to explain their design process and how they managed their project.