The West Cheltenham development formed part of the Joint Core Strategy that was agreed between Cheltenham Borough, Tewkesbury Borough and Gloucester City Councils in 2017.

The Joint Core Strategy saw the three councils commit to a development plan for the county as a whole through to the year 2021.

According to the foreword of the weighty 136page document detailing the development it "sets out the amount of new homes, jobs and supporting infrastructure that is needed to 2031.

It also "details the strategy for how this is to be delivered in a managed and resilient way while protecting our exceptional natural and built environment." 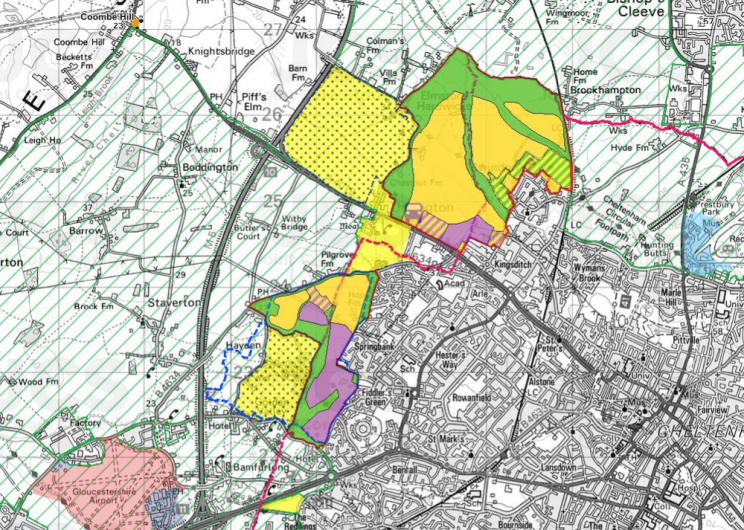 There were seven sites set out for development with the ambition of seeing 10,900 new homes being built.

The plan also set out how much new employment land was to be delivered across the sites, with 112.2 hectares within the plan.

Work has already started on some of the sites. The north Brockworth development for 1,500 new homes has already passed outline planning with spades soon in the ground.

A commercial site of 14.3 hectraes Ashworth is also in planning as are homes at Pirton Fields in what is called the South Churchdown development.

The two biggest areas for development are to the west of Cheltenham.

West Cheltenham, including the Cyber Central development has plans for 1,100 new homes, but crucially 45 hectares of employment land.

According to the JCS document, the West Cheltenham development would be accessed off the B4634 Old Gloucester Road, Fiddlers Green Lane and with access from the A4019.

That leads into the plan to widen the A4019 - the Tewkesbury Road that links Cheltenham to Junction 10 of the M5 motorway and the proposed development of an 'all ways' junction.

An announcement was made by the two borough council's Gloucestershire County Council and GFirst LEP in March detailing plans for the new junction.

That was greeted with positive feedback from the leaders of all three of the councils involved in the JCS.

Cllr Steve Jordan, leader of Cheltenham Borough Council, said, "Everyone I have spoken to locally thinks upgrading J10 is needed as soon as possible so I am pleased that we are getting this message across at a national level."

Cllr Paul James, leader of Gloucester City Council, said, "Upgrading junction 10 is vital to enable us to achieve the housing and employment growth set out in the Joint Core Strategy.

"This announcement is good news and shows the Government's confidence in our ability to deliver."

Cllr David Waters, leader of Tewkesbury Borough Council, said, "This is great news for Tewkesbury borough and for the whole of Gloucestershire.

"An 'all ways' junction 10 will help the JCS authorities drive growth to create homes and jobs for the people of Gloucestershire."