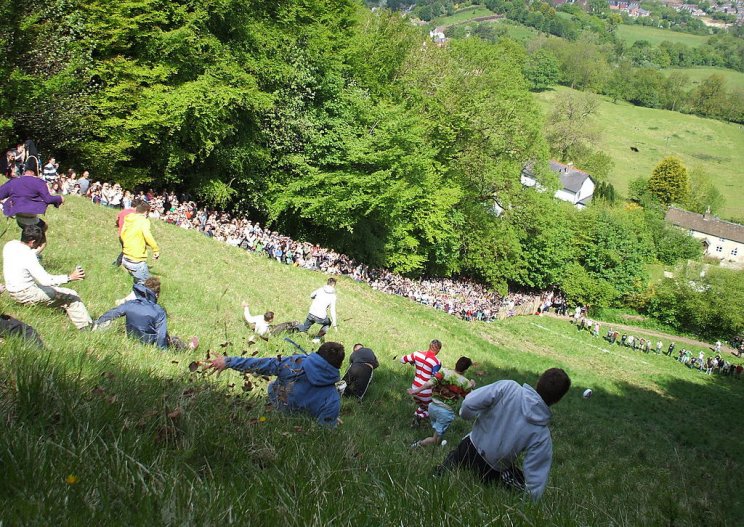 The main road leading to famous Coopers Hill - where Gloucestershire's crazy annual cheese rolling races are held - is to be closed for 12 weeks in the New Year because of subsidence.

Landslips from the steep hill have caused damage to the A46 Cheltenham-Stroud road just outside Brockworth and near the turning for the lane to the summit of the landmark Hill.

The 1:2 gradient hillside is the venue each Spring Bank Holiday for the cheese rolling races when competitors from all over the world throw themselves down the treacherous slope in pursuit of bouncing Double Gloucester cheeses.

Gloucestershire County Council announced today that the A46 will be closed at that point from January 4 till the end of March for strengthening work to the carriageway.

"A section of the road, about 1km south of Brockworth, is suffering from subsidence caused by landslips," said a Highways department spokesperson.

"Highways engineers need to strengthen this section of the A46, which connects Stroud to Gloucester and the Brockworth Bypass, to prevent the road condition from deteriorating any further.

"The crash barrier also needs to be stabilised, as it has suffered damage to its foundations, to ensure all road users can safely use the route.

"Contractors Walters UK Ltd have been appointed to carry out the scheme, which will be funded with £1.2 million given to the county council from the Department for Transport's infrastructure investment fund earlier this year.

"The work is due to begin on January 4 and finish on April 23. The A46 will be fully closed for just over 12 weeks, until March 31, so work can take place safely. This will be followed by lane closures as construction continues.

"It will involve drilling into the ground and filling the holes with concrete and reinforced steel structures. Forty-two of these foundations will be installed, reaching a depth of 12.5m and will be placed along a 90m area.

"During the works new sections of drainage will be installed and the highway will be fully reconstructed. Social distancing measures will be in place to help ensure our highways crews are kept safe.

"A diversion will be in place during the closure via the A4173 and A417. Access to private properties will be maintained at all times from either side, but not through the road closure where the construction site is based."

Cllr Vernon Smith, cabinet member for highways, said: "We appreciate this work will be inconvenient as it does involve the closure of the A46 for a number of weeks, but it is essential to carry out these repairs.

"I know the diversion will cause some disruption but the safety of road users and the workforce is our priority so I'm grateful for everyone's patience while this is carried out."

More information and future updates, including a map of the diversion route, can be found at www.gloucestershire.gov.uk/A46