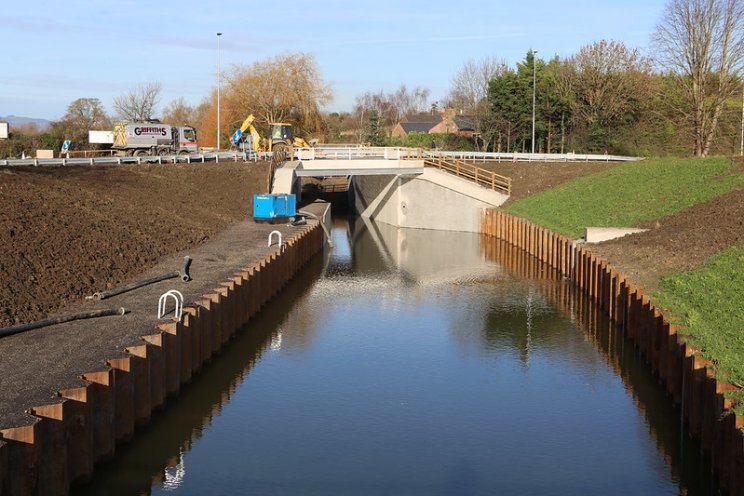 An innovative project to build a canal through the middle of a busy roundabout has been nominated for a prestigious engineering award.

The project is one of ten engineering feats from the South West to be in the running for the Institute of Civil Engineers' People's Choice Award 2021, aimed at recognising a civil engineering project that capture's the public's imagination.

It was funded by a £4million Highways England grant to Cotswold Canals Trust to restore parts of the Stroudwater Navigation including waterway, locks, bridges and wetlands which were destroyed when the A38/A419 roundabout and M5 were built in the late 1960s west of Stonehouse.

The completion of this project restores a section of canal that has been missing for nearly 50 years.

The renewed stretch is constructed through the busy A38 Whitminster Roundabout, including two new bridges, a canal channel within the roundabout and a towpath under the bridge.

The project team combined the work with that at another site in the county which prevented 15,000m3 of clean natural material from going to landfill and helped save approximately £700,000.

Significant social, environmental and economic benefits will be achieved by providing a car-free walking and cycling route linking the Sharpness canal towpath at Saul Junction to Stroud and beyond.

Other benefits include increased biodiversity through creating new wetland habitats, attracting external investment to support the regeneration of old industrial areas along the canal corridor, and boosting job creation and the local economy.

More than 800 volunteers are registered with the canal restoration, which provides jobs to the local community and supports the development of new skills.

"Completion of this small but complicated part of the jigsaw puzzle has helped inspire the belief that restoring the canal will become a reality. There is a great deal of interest and excitement in seeing the gradual restoration of this canal, benefitting both the local community and economy.

It would be a huge boost to the project if people vote for it to win the ICE People's Choice Award."

Councillor Vernon Smith, Gloucestershire County Council cabinet member for highways, said: "It's fantastic news that the project has been chosen as a finalist in these awards. Completing this project during a challenging year was a great achievement by the team so I'm delighted it has been given this deserved recognition.

"It would be the icing on the cake if it won the ICE People's Choice Award so I would encourage everyone to please register their vote."

Highways England Project Manager Sarah Lewis said: "We are delighted with the nomination and hope that people will vote for this scheme that goes beyond traditional road building. Our Designated Funds programme was developed so that we can invest in improvement projects like this which have a positive impact on people and communities."

The project is part of the multi-million restorations of waterways and towpaths in the Stroud district by partners including The Cotswold Canals Trust, Stroud District Council, Gloucestershire County Council and Canal and River Trust known as Cotswold Canals Connected.

To vote for the canal project, click here. The deadline is Friday July 30th.