It is not often drivers get the chance to overtake a Boeing airliner capable of 540-plus mph, but that was the opportunity on Gloucestershire's roads today.

At least for the lucky ones who were able to get past. 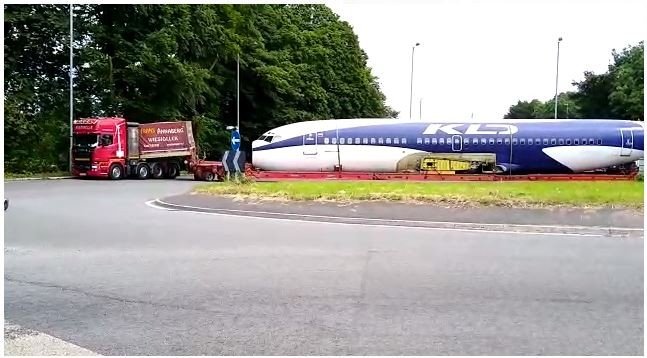 Anyone who tried navigating the A417 from Cirencester to the infamous traffic black spot at Crickley Hill today, and then down towards Gloucester, will have probably found themselves doing a double take.

Also undertaking the journey, at a height considerably lower than it was designed for (not surprising as the former Russian airliner has shed its wings) was the best part of a Boeing 737-300.

Whether it was the pilot's lack of familiarity with the UK Highway Code that applies at ground level, or more likely because negotiating a 45 degree downhill turn in charge of such a craft requires some unusual thinking, the Boeing circumnavigated the infamous roundabout the wrong way.

When in service it would have been part of the 16-strong fleet for now defunct Russian carrier KD Avia, but of late it has under the care and attention of Cotswold-based Air Salvage International Limited at Kemble airfield.

The business told Punchline confidentiality agreements meant it was unable to comment on who had bought the fuselage or where it was heading (although for those even more curious than us tracking it should not be too much of a problem).

And from the company responsible for moving the body of the plane, Polish-headquartered heavy load specialists Transannaberg Wiesiollek, little was forthcoming either.

It was its driver's considerable skills which made the Air Balloon roundabout negotiation such a success.

The company told us it too was unable to comment on the contract or its customer.

Police had warned drivers in advance through social media that "due to the size of the load there is likely to be temporary disruptions to road users around the Crickley Hill roundabout as traffic will be held whilst this manoeuvre is undertaken," said a statement from Gloucestershire Constabulary".

They were not wrong.

It has carried out more than 700 projects worldwide over the last 20 years. It describes its "disassembly services" as "at the industry forefront".

"We are also an approved recovery agent for many of the UK's Regional Airports and operators providing quick response teams and equipment," Catherine Bunney, general manager at Air Salvage International, told Punchline.

"One additional expertise that makes ASI exceptionally unique is the capacity to dismantle, move and rebuild aircraft. We have carried out this task on over 30 aircraft to date. We also regularly supply colleges and training organisations with expertly cut sections (wide and narrow bodied), tailored to meet individual demand by our own in-house fabrication team.

"Due to the knowledge, expertise, flexibility and adaptability of all our staff at the Cotswold Airport facility it has awarded us many unusual projects, commercially and within the TV and film industry around the world. With the hard work and determination of our exceptional staff, today we were happy to send another bespoke project out for delivery."

"We would like to thank the members of the public for their patience today whilst this specialized load makes its way to its final destination."