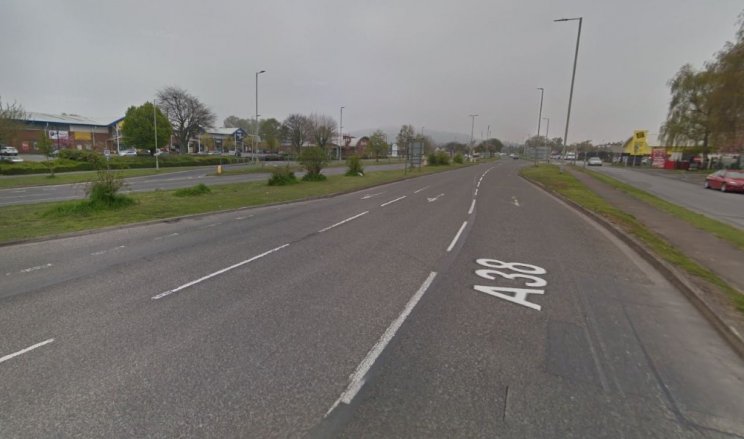 Two road rage attackers who pursued another motorist after 'taking offence' at his driving and then kicked his car and smashed a window with a metal bar have been jailed for five months each.

George Villis, 20, of Pembury Road, Gloucester, and Cameron Dix, also 20, of Tredworth Road in the city, were together in a white VW in Eastern Ave, Gloucester, when the driving of Mohammed Amin in a BMW annoyed them, Gloucester crown court was told yesterday.

Prosecutor Virginia Cornwall said that after Mr Amin's car was damaged the men tried to get away. As they did so Mr Amin got out of the car and began taking photos of them on his phone - at which they drove at him. They then also attacked him with the crowbar.

Despite the attacks, brave Mr Amin stood his ground, fought back, and managed to seize the keys of the VW to prevent the attackers getting away.

Villis and Dix (pictured below) both admitted charges of affray and criminal damage. 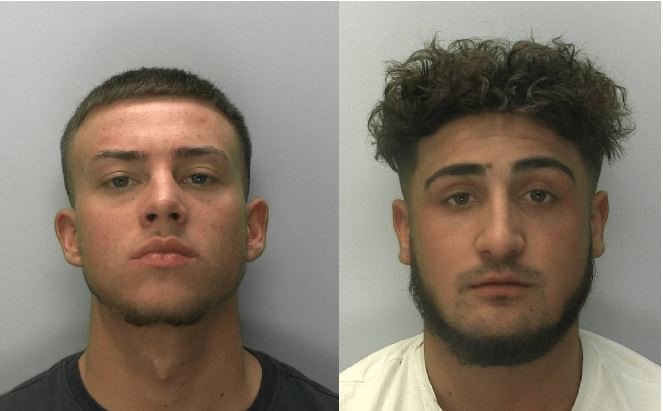 Mrs Cornwall said that the incident, witnessed by several people, began in Eastern Avenue when "Mr Amin noticed that the two men in the VW car were in pursuit of him for about a quarter of a mile."

She went on "He continued to his destination, near Saintbridge Rugby Club, and then realised he was being approached by the two men in the white car. The occupants got out and began banging on Mr Amin's BMW.

"They booted in one of the vehicle's doors and smashed one of the windows with a metal bar, which was being wielded during the course of this incident.

"The two men got back into the car and tried to leave the scene, but as they were in a cul-de-sac, they were prevented from leaving by the BMW.

"Mr Amin stood in front of his car and took photographs of the men approaching him on his phone. The pair then drove straight at him, narrowly avoiding him.

"A lot of residents in the road were at home at the time and witnessed the men shouting at each other and the crowbar being used offensively by Dix towards Mr Amin, who he struck, but didn't cause him any significant injury.

"Mr Amin managed to get hold of the metal bar and used it in self defence. He injured one of the defendants during this affray. Fists were also used during the incident.

"During all of this Mr Amin also managed to remove the keys from the ignition of the VW, preventing Dix and Villis from leaving. He held onto the keys until the police arrived.

"Mr Amin was clearly shaken up by the incident. This was a sustained attack targeting an individual with a weapon."

Mrs Cornwall said when Dix was arrested he explained to police that he got out of the car when he realised that Mr Amin was taking pictures of them. He admitted chasing Mr Amin on foot and attacking the BMW with his boot and fists.

Jason Coulter for Dix said: "This is an incident that got wholly and unnecessarily out of control. It started with an incident on the Eastern Avenue dual carriageway. Whatever happened galvanised them to do something they would not normally do.

"The pursuit was less than a quarter of a mile and what followed was a disgraceful incident which Dix accepts should never have happened.

"It seems he panicked as he realised he had committed a criminal offence. He tried to expurgate himself from the scene of the incident. It was two young men against one.

"Dix fully accepts what he has done and has made it clear it will never happen again. He admits he has made a serious and grave error of judgement.

"He also wishes to publicly apologise to Mr Amin for his behaviour. He knows it was disgraceful."

Joe Maloney for Villis said: "Something obviously happened on the Eastern Avenue to provoke the two defendants to act totally out of character."

The Judge, Recorder Jonathan Barnes, interjected loudly: "Even if something did happen, it still doesn't warrant this kind of behaviour. It's road rage."

Mr Maloney added: "Villis is a man of good character and something must have happened to which they took offence.

"If the pair of them had driven into a road that wasn't a cul-de-sac then part two of this incident would not have happened.

"Villis is a hardworking man who thoroughly regrets his part in the affray. He also wishes to apologise to Mr Amin for his actions. The likelihood of his reoffending is very low."

Recorder Barnes said: "This is a case of road rage. The courts always regard cases of this kind as very serious.

"And within that general category of road rage, it is one of the worst of its kind."

The judge turned to the defendants and said: "The two of you took some sort of objection to Mr Amin's driving. He drove away and you pursued him. And when he parked his car you drew up and smashed his window. This must have been a frightening experience for him.

"You then drove straight at him and attacked him again. You had a metal bar which Mr Amin was struck with, but luckily he didn't sustain any serious injuries. This was a sustained attack with a weapon.

"This is a very serious case of road rage, which crosses the custody threshold, as it occurred in a public place and was witnessed by a number of people."

The defendants were each sentenced to 162 days in a young offender's institution.