Call it common sense, call it radical, call it provocative, call it marketing, call it (very) political, the businessman behind it will tell you 100 windmills to power Gloucestershire is the way to go.

His press release calls it a "bold new plan", and if you take it at face value "green entrepreneur" Dale Vince's declaration that the county can seek its low-carbon dreams by building 100 turbines atop its hills is certainly that.

That being his assertion that 100 community owned windmills could provide 10 per cent of all annual domestic power for homes in Gloucestershire. That he happens to run an electricity company, knows a thing or two about wind turbines, planning law, the sensibilities of Gloucestershire natives, gave his post immediate traction.

Its political intentions were also made clear in the Facebook post - which even had a map attached as to where the windmills might be best placed, enough to make those not really paying attention to the post to sit up and take notice. Especially is they live in the Cotswolds.

The above concept was, we learn, "recently discussed the concept at a Labour Party Green Industrial Revolution event in Nailsworth".

"To fight our way out of the climate crisis we need to have a fundamental rethink of how we do everything, including powering our lives," said Mr Vince, whose post led to and saw him take part in an online debate on the issue. 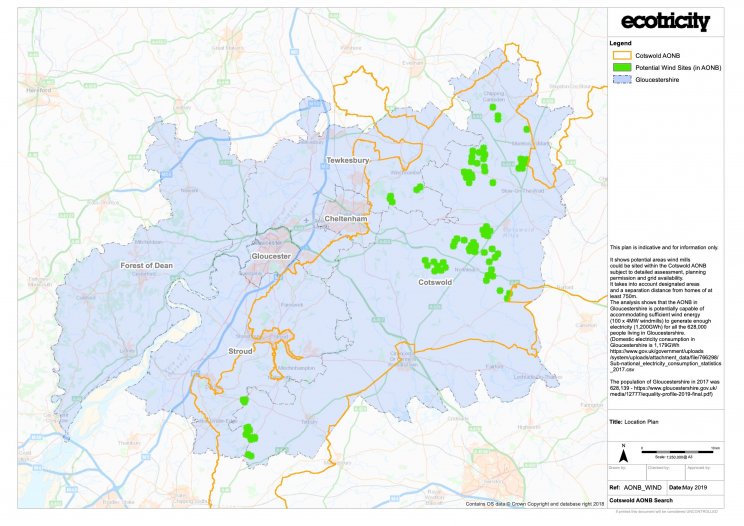 "Our hilltops are a man-made environment, shaped by decades of farming, with their view fiercely protected. How these hills look is currently more important than the air we breathe and the environment that supports life - the climate. We need to re-think this.

"Windmills are a sensible addition to our landscape, a proper response to the climate crisis and are totally reversible - it's the least we can do to have a fighting chance. With just a hundred modern windmills Gloucestershire could take responsibility for where its energy comes from.

"A green industrial revolution could harness the economic benefits for everybody that lives in our county - a sum in the region of £8 to £10m per year.

"It's a massive opportunity to play our part and create sustainable local economic benefits. We could do all of this in three years, and if the local authorities want help making this happen, we're here ready to do that."

Whichever way you lean on the idea, Mr Vince acknowledges his proposal is just that without a "fundamental change" to planning law.

In May this year Gloucestershire County Council declared a goal of carbon neutral by 2050. At the end of the month it staged a climate change summit, along with business group GFirst LEP as it sought to inform its plans to deliver the Gloucestershire Energy Strategy

The discussions have informed the county council's Climate Change Strategy and Action Plan for the county.