Stroud community rallies to raise £2,000 to give teen with rare heart defect set of electric wheels

A Stroud charity and youngsters from across the Five Valleys have teamed together and raised more than £2,000 to fund an electric trike for a teenager with a rare heart condition.

The Door in Stroud first met 14-year-old Ollie last year after he attended one of their youth clubs at The Pod in Stonehouse.

Ollie was born with Hypoplastic Left Heart Syndrome, a condition which means his heart is unable to pump or circulate blood around the body as effectively as it should. 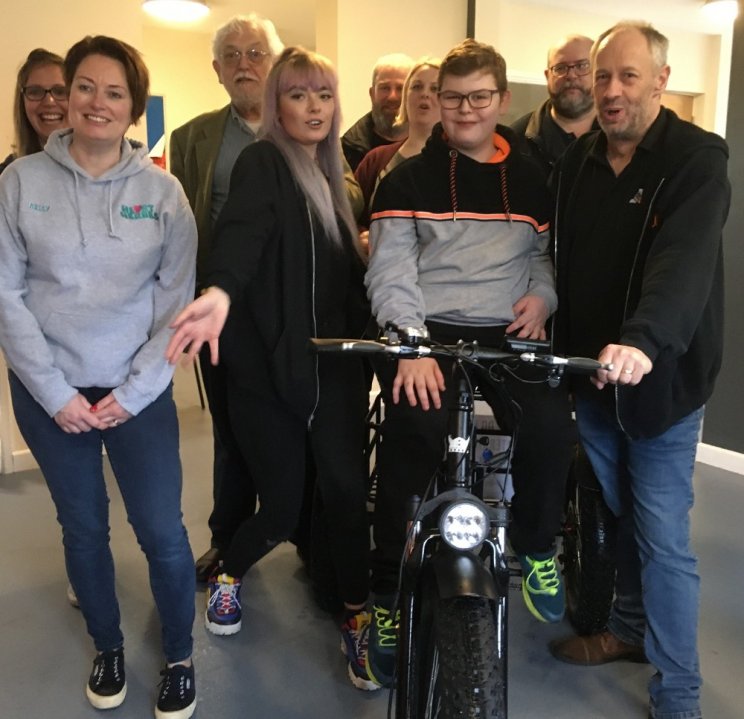 He had three major open-heart surgeries before his third birthday and, although slightly constrained by his condition, Ollie lived a happy childhood

However, at the age of ten, Ollie contracted plastic bronchitis, a rare lymphatic flow disorder that causes severe respiratory issues.

Ollie's limited mobility was affecting his school life and social life but through talking to a mentor at The Door, a solution was found.

The Door is one of the scores of community charities which has been supported by the Commissioners Fund, the £1million that has been made available annually by the Office of the Police and Crime Commissioner for Gloucestershire.

Through talking to his mentor a plan was hatched to fundraise for a trike that would help him get around more independently.

Thanks to the amazing community spirit of the young people at The Door's Youth Clubs, donations from the local community and financial support from Heart Heroes the £2,000 target was reached.

Kelly Cornish from Heart Heroes said: "we read Ollie's story on Social Media and as a charity that supports children living with Heart conditions, we wanted to help.

"The young people and volunteers at The Door had raised a fantastic amount already, so our small contribution meant that Ollie could have his trike sooner.

Ollie's Mum Katherine added: "The tricycle is important because Oliver doesn't have the energy to ride a normal bike but he also needs to keep himself healthier with exercise due to his Conditions.

"Ever since Ollie knew the trike had been ordered he was excited and increasingly to the day it was delivered. He has been out on it several times and the assistance it gives him is noticeable.

"It was something that most people take for granted that Oliver simply couldn't do.

"It will make a massive change to his ability to get out and about. We can only thank everybody involved in whatever they did for making this happen.

"Ollie said "riding the Trike is so much easier than a bike or walking. I can go much further and not get out of breath.

"When I want a rest the motor helps do the work for me. It will be so much help in getting out and keeping up with my friends and family.

"I am stunned at how many people have helped make this happen, but really happy."