Work has started on a major development which will bring 1,300 new homes and hundreds of job opportunities near Gloucester.

Taylor Wimpey has started work on the residential section of the multi-use development by Robert Hitchins Ltd at Innsworth.

When complete, the scheme will include retail and leisure facilities at a 10-acre district centre, as well as commercial opportunities at a four-acre office park and a 6.7 acre business park.

The development will also include a primary school, sport and leisure facilities and extensive landscaping.

Work on a major roundabout on the A40 Gloucester bypass - between the Longford and Elmbridge Court roundabouts - is due to start in the coming months, providing the main access point into Innsworth Park and eventually linking back to Innsworth Lane.

A spine road will be built leading from the A40 to Innsworth Lane, providing greater connectivity to the north east, Churchdown, Staverton and Cheltenham.

Robert Hitchins senior development manager Michael Plimmer, said: "We're delighted to see the masterplan for the Innsworth Park development taking shape and we have already commenced detailed discussions with a number of interested parties who would like to take space in the new scheme.

"Since planning permission was granted in 2017, a huge amount of preparation work has taken place and we are now pleased to be in a position to get started in earnest.

"It's an exciting scheme which will give a massive boost to the local economy."

He continued: "It will not only deliver 1,300 much-needed homes to the edge of Gloucester, but will also bring important new local facilities to the growing population on the north side of the city with an estimated 700 job opportunities in the district centre, office park and business park.

"The whole development is perfectly placed, just three miles from Gloucester and with direct access to the A40 and the M5. It is also close to Imjin Barracks and to the Innsworth Technology Park, so helping to create a vibrant mix of residential and employment uses."

The Innsworth Park District Centre will be the largest single provision of shopping and leisure facilities on the northern side of Gloucester.

The Innsworth Business Park, close to the entrance of the new development on the A40, has planning permission for B1 and B8 use and can accommodate several commercial buildings or one single building of up to 118,403sq ft.

And the Innsworth Office Park has consent for B1 office use up to a gross internal area of 5,946sq m.

The whole Innsworth Park development will take place in phases with the road infrastructure and primary school due to be complete by 2021.

The residential area of two, three and four-bedroom homes has been named Whittle Park in honour of local hero Sir Frank Whittle, creator of the jet engine.

The developers have contributed £10.8million as part of a Section 106 agreement towards education, sports and community facilities, public open spaces and transport. 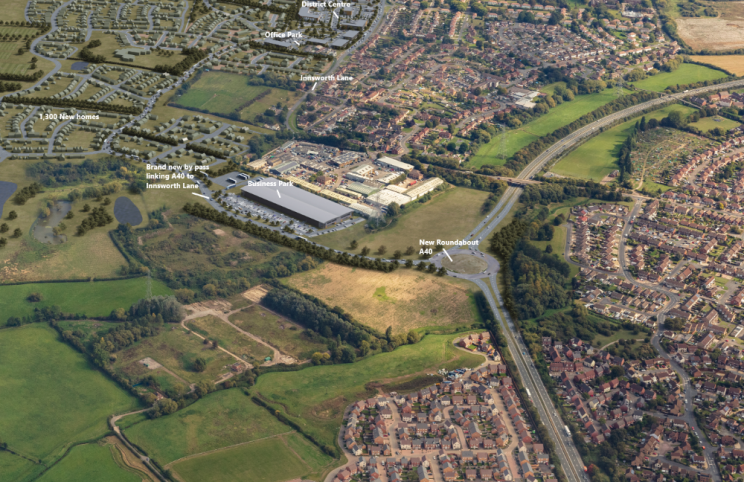