However, the lunchtime high tide caused the road to be temporarily closed again as the water levels rose.

The Gloucestershire Highways roads team announced via twitter that the road was open before adding "please drive with care as there's still some standing water in places."

However, just before 1pm Tewkesbury MP Laurence Robertson tweeted that the road had once again been forced to close.

ROAD INFORMATION: The A417 at Maisemore has been temporarily closed again due to tidal impact. I have been assured that the relevant teams are aware of the situation and will aim to reopen the road again as soon as they can.

Once the tide goes out the road is expected to be open again leaving just one main strategic route in Gloucestershire that is closed due to the effects of the recent wet weather and flooding. 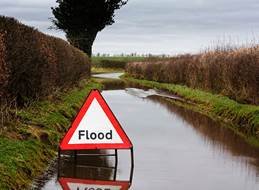 The B4213 at Haw Bridge is still closed between Apperley and Tirley due to river flooding and there are still a number of minor roads in the county closed.

While the main roads through Tewkesbury are now open, Swilgate Lane and Gander Lane are closed, as are a number of minor roads around Twyning.

In total, there are 15 warnings over minor road closures within Gloucestershire.

These can be read HERE .

Today's rain hasn't yet led to any further flood warning being put in place for Gloucestershire.

Currently, there are no severe flood warnings on the rivers Severn, Wye or Avon in the county.

There are still flood warnings in place on the Severn at Ashleworth, Apperley and The Leigh, Sandhurst and Maisemore and at Severn Ham in Tewkesbury.

The current information from the Flood Warning Information Service is for highs of around 4.1 to 4.5metres in Tewkesbury on Wednesday this week and between 3.9 to 4.3m in Gloucester on Thursday.

The warning states: "These peaks are slightly lower than those seen last week. The forecast is unsettled for the next few days which may cause river levels to remain high for the rest of the week.

"We are closely monitoring the situation. Please avoid using low lying footpaths near local watercourses and plan driving routes to avoid low lying roads near rivers, which may be flooded.

A full list of flood warnings can be read HERE