The Dean Forest Diesel Association (DFDA) have completed their restoration and overhaul of the 31466 locomotive. 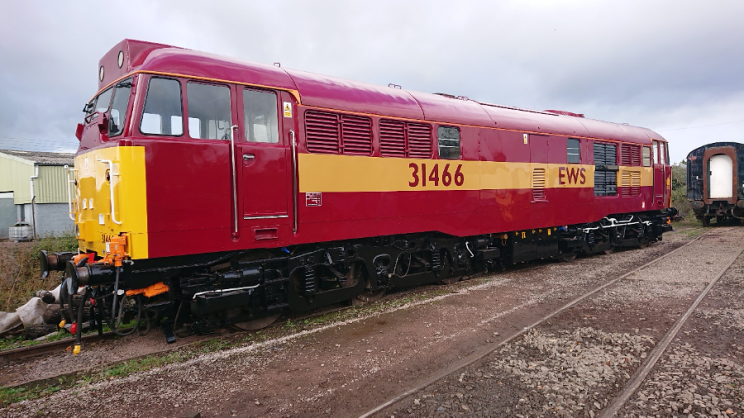 This locomotive was one of 263 (and 26 preserved) made by Brush Traction for British Railways during 1957-1962 as a direct replacement for steam engines. It was built in June 1959 to operate freight and passenger trains as part of BR's Modernisation Plan.

DFDA's 31466 carries the livery of the post-privatisation freight operator, English Welsh and Scottish and was one of just two to do so whilst working on the main line. The 31/4 numbered locomotives were fitted with sufficient electric train heating to power eleven Mk3 carriages and were often used to pre-heat a train in a depot before being hauled by more powerful locomotives for their day's inter-city duties. 31466 was withdrawn from the main-line in 2001.

Dean Forest Railway's operations director, Alastair Clarke said: "We all look forward to 31466 returning to service on our Lydney Junction-Parkend route where its smart appearance will be certain to attract a great deal of attention. Meanwhile our ever-popular Santa Specials in December will be steam-hauled, as is traditional."

DFDA's Luke Wayman added: "Our restoration and overhaul has been continuing for three years. It is powered by a 1470 hp English Electric twelve-cylinder diesel engine, which has remained in working order throughout. It powers the generator to supply the DC motors on four out of the six axles.

"The great proportion of our work meant replacing complete sections of rotted or corroded cab with fresh metal or timber, renewing window surrounds and wiring. We stripped much of the whole body to bare metal before applying filler then re-painting in several coats of primer, undercoat and EWS colours.

"A few weeks ago, we successfully ran it on our yard, so after some final tweaks we look forward to 31466 playing its part at the DFR again."

Mr Clarke continued: "Our Wednesday and weekend trains comprise a mixture of heritage diesel multiple-unit and diesel or steam-hauled carriages. Our workhorse has been the hard-working Gladys, a class 08 diesel-electric shunter, so it will be a treat for people to sit in a train hauled by a 'real' diesel-electric locomotive again!

"31466 will certainly attract more visitors, so we might let Gladys concentrate on our new, Covid-friendly attraction, the brake van rides."

The DFR has suffered from a dramatic drop in revenue during the Covid-19 pandemic so, to help the railway survive as one of the principal tourist attractions in the area, the Dean Forest Railway Society launched an Emergency Appeal earlier in the year, aiming to establish a fund of £50,000.

By October the society treasurer, Tim McLennan was able to announce that over £66,000 had been raised - www.justgiving.com/crowdfunding/dfrs-emergency-fund.