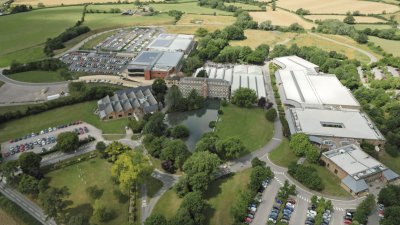 The precision engineering company, based near Wotton-under-Edge, said revenue estimates to £510million, having previously placed them between £490million and £505million.

It said restructuring charges were partly behind the fall in expected profits from £31-41million to £4million.

News of the revenue estimates saw Renishaw's shares rise by more the two per cent to its highest level since February 2019.

Renishaw, which cancelled its dividend last month, said the restructuring costs were related to its metal additive manufacturing business.

Another £22million was related to fair value losses.

Renishaw was a founding member of the VentilatorChallenge UK which saw a consortium of aerospace, motorsport, automotive and medical businesses produce and deliver 13,437 ventilators to the NHS during the coronavirus pandemic.

Components were made at the firm's Stonehouse machine shops with around 350 employees involved with the project.

Chief executive William Lee said, "I am proud of the part that Renishaw has played in this incredible effort to support the NHS at a time of national crisis and also the way that the wider engineering community has collaborated to achieve something that many thought was simply not possible.

"What has been highlighted through this project is that manufacturing is a vital sector of the economy and should be supported in the future as being of strategic national importance."