The original candlestick is on show at the V&A Museum, while the Renishaw-manufactured replica will be displayed and used at Gloucester Cathedral.

The candlestick is a rare example of the skill of early 12th century English metalworkers. An inscription on the stem states it was given to the church of St Peter, now Gloucester Cathedral, by Abbot Peter, who held the post from 1107-13. 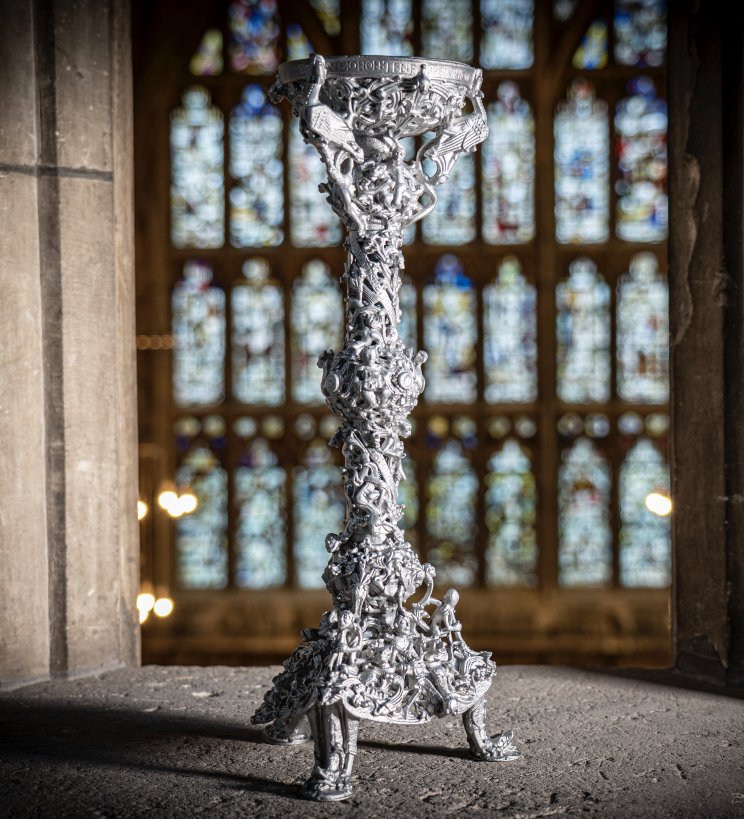 A 3D laser scanner was used to capture the complex geometry of the original candlestick, which consists of densely-entwined foliage and fantastic creatures, so that it could be reproduced exactly. Renishaw then recreated the candlestick by building it up layer by layer from aluminium powder, using one of its RenAM 500Q multi-laser additive manufacturing (AM) systems. The replica has now been made available to Gloucester Cathedral.

Paul Govan, customer training manager at Renishaw and chief facilitator of this heritage preservation project, said: "Because of the Gloucester Candlestick's complexity, there is no other way to reproduce it than additive manufacturing. The candlestick is composed of three distinct sections, each with intricate openwork decoration and a patina that has accumulated over 900 years. Renishaw used 3D scans of the original candlestick to reverse engineer each aspect of the design to recreate this historic masterpiece in all its original glory."

Material choice played a key role in the manufacturing process, and initial plans to use titanium models were abandoned in favour of more malleable aluminium powders. The change from titanium to aluminium powders allowed Renishaw engineers to more easily clean and finalise the candlestick, to achieve a higher level of detail. Fittingly, material choices are also part of what makes the original Gloucester Candlestick special, as it is cast using a brass alloy with unusually high silver content.

Renishaw's use of cutting-edge AM technology to recreate this 12th century English masterpiece demonstrates the potential of this process for recording and reproducing intricate historic treasures and antiques.