By The OPCC for Gloucestershire | 17th October 2019

The annual report of the Office of the Police and Crime Commisioner for Gloucestershire details what has happened over the past 12 months and the aims of the office for the coming year. 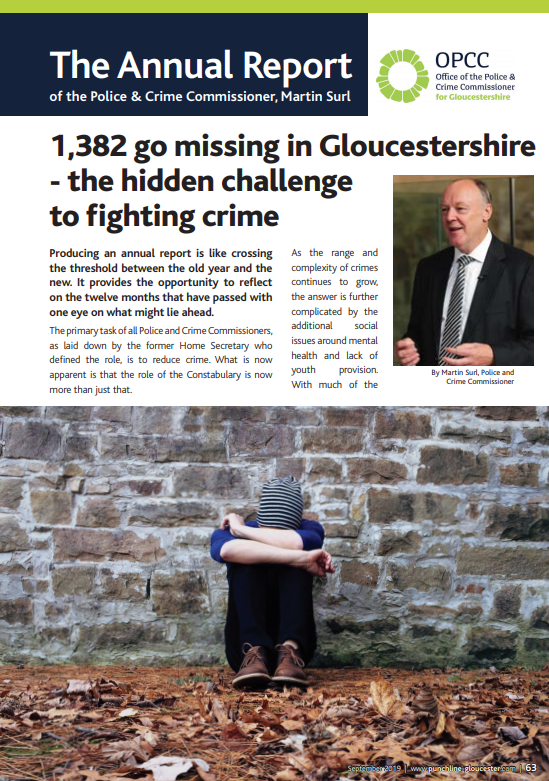 Introducing the report, Gloucestershire's Police and Crime Commissioner Martin Surl said: "Producing an annual report is like crossing a threshold between the old year and the new.

"It provides the opportunity to reflect on the 12months that have passed with one eye on what might lie ahead.

"The primary role of all Police and Crime Commissioners as laid down by the former Home Secretary who defined the role, is to reduce crime.

"What is now apparent is that the role of the Constabulary is now more than just that."

The report goes on to detail the roles, responsibilities, duties and aims for Gloucestershire Constabulary for the coming year, while also reporting on its achievements and results.

There is a full double-page spread detailing the all-important Gloucestershire Constabulary Budget, which shows how £111million was spent last year and how £119.9 million will be spent in 2019/20.

How that money is raised, what it is spent on and where it goes is set out in complete detail for all the hard-working tax payers who fund the force to see how it is spent.

There are features on the new Police Academy in Berkeley, an in-depth interview with chief constable Rod Hansen and details of the Police and Crime Plan that runs from 2017 to 2021.

Punchline editor Mark Owen said: "At a time when police numbers and force recruitment is in the news on a regular basis, it's fascinating to see the report from the Gloucestershire OPCC.

"Whether you agree or not with the idea of the OPCC, this is essential reading. it details where your money is spent and how the force spends it.

"With Gloucestershire getting 46 new officers next year and the new academy opening in Berkeley soon, it will be fascinating to see what's next for the office."