Bourton-on-the-Water Primary Academy has welcomed pupils into its new classrooms following the completion of a major expansion and improvements. 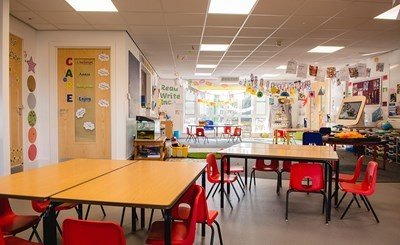 The academy has moved into its new Early Years and Reception classrooms which form the final step of the £1.8million, three-phase construction programme which has expanded the school so it can admit 45 children per year.

Alongside new classrooms, nursery and pre-school facilities, a play area was completed in addition to improved drainage and a new mains supply.

Headteacher John ap Robert Jones said: "We are delighted with the finished project and now have classrooms that are spacious, bright and cheerful.

"Our special thanks goes to all those involved in the build for their work, efforts and excellent liaison with the school."

Previous phases have included extending the original Victorian school building to provide a new entrance foyer and internal remodelling to form new offices and a classroom, as well as the addition of a kitchen, servery and store room.

Councillor Patrick Molyneux, cabinet member for education, economy and skills at Gloucestershire County Council, said: "The new facilities at Bourton-on-the-Water Primary are fantastic and mean the school can accommodate the growing numbers of children in the local area."

Speller Metcalfe worked closely with the school which remained open during the majority of the building work.

Joint managing director Andy Metcalfe said: "Speller Metcalfe has been working alongside Gloucestershire County Council and the school over the last three years to help create a space that truly meet the needs of the pupils and staff.

"It is incredibly inspiring to see the realisation of this project, which will support so many families from the local area and enable the school to provide the best facilities for its pupils."