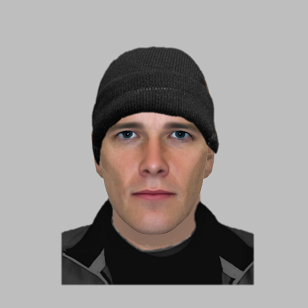 Police have released an efit of a man they would like to identify and talk to in connection with a suspected robbery in Gloucester.

A woman in her 60s was walking her dogs between 7am and 7.20am when she was approached from behind by two men.

One of the men has pulled at her dog lead with force, making her turn toward him. She reported to have been pushed and has been left feeling shook up by the incident.

It is believed that during this incident a silver iPhone SE has been stolen.

The men, who both then fled the area, are described as both being white, with pasty complexions and being in their early to mid 20s.

This first man was described as between 5ft 6 and 8 ins, of a slim build, with a pasty complexion, dark eyebrows, clean shaven, wearing a black hat and black clothing.

The second man was described as being 5ft 6ins and wearing dark clothing.

Officers have made a number of enquiries and are now appealing to the public for help.

Anyone with information which could help to identify the man should contact police quoting incident 100 of 15 February. You can do this through the Constabulary's website: https://www.gloucestershire.police.uk/contact/af/contact-us/us/a-crime-that-has-already-been-reported/ or by calling 101.