Nothing unusual about that, given the railway has over 950 volunteers: but these 12 were among the railways first volunteers, 40 years ago this month.

The occasion was to mark their continuing volunteer service with awards presented by Colonel Mike Bennett OBE, DL, a non-executive (and volunteer) director of GWSR Plc. 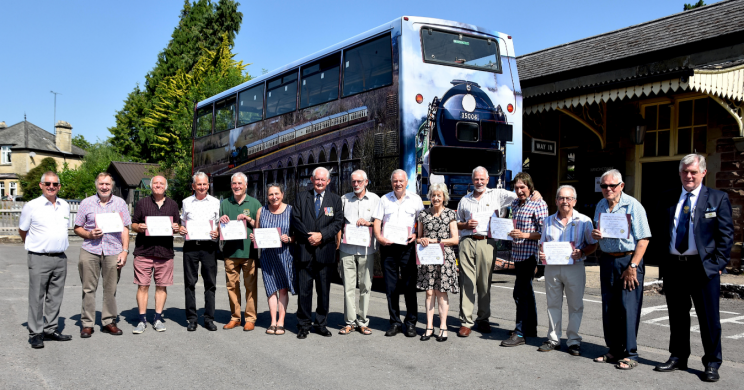 The company was founded to buy as much as possible of the trackbed of the former Cheltenham (Gloucestershire) to Stratford-upon-Avon (Warwickshire) railway, closed in 1976, to restore it and operate a train service over it. British Rail had finished removing all the track and infrastructure from the route only months before.

In the event, the new company was successful in purchasing 15 miles of the vacant line between Cheltenham Racecourse and Broadway and those early volunteers set about rebuilding it, to become one of the UK's leading heritage railways.

At an informal ceremony at Winchcombe station, which also marked the opening of a special exhibition to celebrate the 40 years of the organisation (open on operating days to 5 September), Col. Bennett presented 40-year pin badges and certificates to the founding volunteers, who included the railway's first chairman, Tim Bazeley.

Col. Bennett commented on the vital contribution volunteers from all walks of life make to society. He said: "We owe so much to you and your colleagues for your vision and determination to create the railway we enjoy today.

"Indeed, without voluntary effort of this kind, we would not have a railway. Today, there are over 950 volunteers who continue to develop it, operate it and do everything necessary to ensure the success of the business. It makes a vital contribution to the local economy as well as offering a meaningful and worthwhile occupation for hundreds of people and enjoyment for thousands of visitors.

"I feel very proud to count myself as a volunteer and to recognise the effort put in by you and those who have followed since those pioneering days."

After the presentation, the dozen who attended posed in front of the Marchants double-deck bus which has recently been 'wrapped' with huge images of the railway's locomotives and trains. They then boarded a steam train for lunch on a round trip to Broadway, on this the first post-Covid service day for the GWSR.