One of the longest-established independent shoe shops in Gloucester is moving to new premises in the city.

A G Meek's relocation from Westgate Street to Eastgate Street will place it opposite the new Primark soon to open.

Liz Meek, marketing manager, said: "We are very excited to be moving to a premises which we believe is more central. Primark has its draw but we are also aiming to attract customers of M and S. We feel it is the right place to be seen."

She admits that before lockdown they were considering moving their business online but it turned out that that was not what the customers wanted.

She told Punchline: "We sell shoes for the women who aren't prepared to suffer to be beautiful. People can come in and they can have lots of choice for their imperfect feet!

"Our customers don't want to buy online, they need to come into a shop to try before they buy and they want to be served."

Liz hopes to keep loyal customers but also attract some new ones in Gloucester.

She said: "We have stayed in Gloucester as it's a unique place. Even though the Gloucester Quays shops opened, they still weren't offering what we offer. People love quality in Gloucester and when they find us, they find what they were looking for! 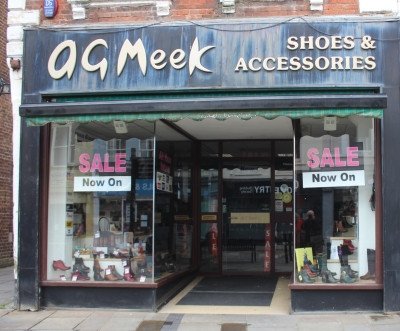 A G Meek was founded in Cardiff in 1912 by owner David Meek's grandfather Albert George Meek, with a second shop opening in the city in the early 1920s and a third in Newport a few years later.

The Westgate Street shop in Gloucester was opened in 1965 in a Georgian-fronted Tudor building.

With the aid of a £200,000 heritage grant from Gloucester City Council and £100,000 of their own money, there are plans to develop the upper floors into flats, while the ground floor will remain as retail space. The historically important ceiling will be preserved in the redevelopment. The shoe repairers will also remain in St John's Lane.

The new store, in the old Accessorize shop on Eastgate, will open on Monday 18th October. Customers can expect the usual top fashion brands such as Kickers, Skechers and Timberland. A G Meek also stocks Rieker, Tamaris, Marco Tozzi, Hotter and Van Dal.

It was AG's two sons who made it famous in the 1950s for selling 'Meek's Sets' - the glamorous 1950s essential of matching shoes, bag and gloves. As one of the first adverts on ITV, their advert and jingle: 'The matching is unique at AG Meek' is still sung back to them.