Old garage to be turned into haven for nature

Wild flowers, trees and seating will transform a former Stroud District Council garage site, as part of a project to improve three canalside areas in Stonehouse.

Gloucestershire Wildlife Trust has started working on the Wild Towns project, which has received funding from the European Regional Development Fund and is being match funded by Stroud District Council and Stonehouse Town Council.

As part of the re-wilding project, great crested newts are set to get a new pond at another site, and a third site will provide a new habitat for bees. 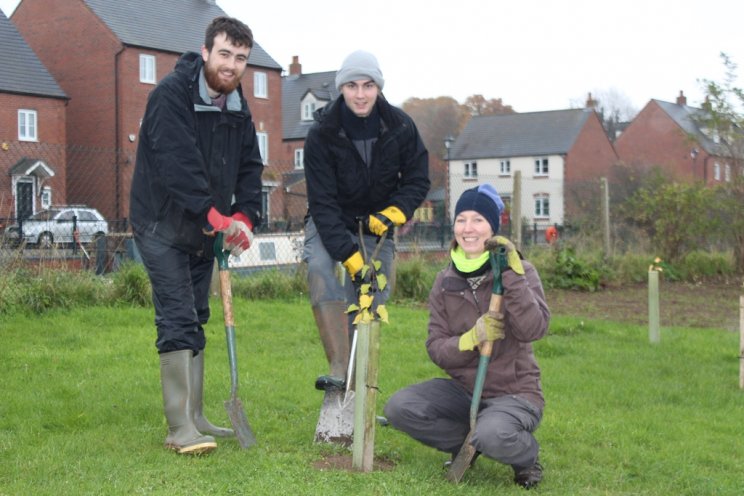 A public consultation was carried out by Stroud District Council and Stonehouse Town Council last year to seek the views of local people on improvements they wanted for these areas, ahead of a National Lottery Heritage bid for the Stroudwater Canal to be restored. There was support for the majority of the improvements suggested, including a Wild Towns project to enhance green spaces for wildlife.

At Wharfdale Way, the Stroud District Council-owned playground and former garage site will have wildflowers sown, pollinator-friendly shrubs planted, improved fencing and increased access onto the canal towpath. Further enhancements will be made to provide seating and more opportunities to play, once plans have been finalised.

A new pond will be dug at Court View for the resident population of great crested newts, and wild flowers will be sown at Boakes Drive, to encourage pollinators and provide a stepping stone for them to other green spaces within the landscape.

Alison Fisk, SDC's head of property services said: "We have listened to the views of local people and responded positively with a plan to improve the natural environment for the benefit of all. I am proud that the partnership between Stroud District Council, Stonehouse Town Council and Gloucestershire Wildlife Trust can make a real difference to these three sites, which will be fully established when Stonehouse is a canal town once again."

Will Masefield, GWT's ERDF Wild Towns project manager said: "We're thrilled to be able to work with so many partners and local communities to make Stonehouse a more wildlife-friendly town and to help people to access that wildlife. Projects like the Wild Towns project can provide a springboard for similar initiatives that continue to champion wildlife in our towns and bring people closer to the nature on their doorsteps, at a time when it needs all the help it can get."

Nadine Smykatz-Kloss, project officer at Stroud Valleys Project, said: "It's great to be involved. Stroud Valleys Project carries out hands-on habitat improvement work with volunteers. We have been involved with the Stonehouse newt pond for many years now and have carried out an annual great crested newt survey where we involve the public and show them why this pond is so valuable."

Stroud Valleys Project has started a new volunteer group specifically for this project. Volunteers have been able to get residents involved, as they can see the benefit this work will bring them.