Nominations revealed for the new mayor and sheriff of Gloucester

Nominations have been announced for Gloucester's new Mayor and for the new Sheriff of the city. 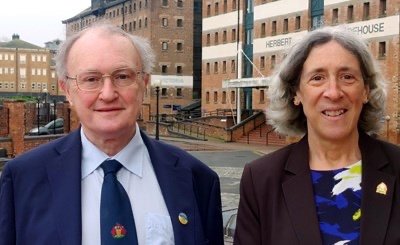 Gloucester city councillor Howard Hyman (Elmbridge, Liberal Democrat) has been nominated to take over from Cllr Collette Finnegan as the new mayor of Gloucester.

While his fellow councillor Joanne Brown (Barnwood, Liberal Democrat) has been put forward for the position of sheriff following on from the current sheriff, Cllr Pam Tracey.

Cllr Hyman has been a city councillor for Elmbridge for almost six years. He was previously a councillor in the London Borough of Hackney for 11 years and also spent two years as a member of the London Fire and Civil Defence Authority.

He is vice chair of the Gloucestershire Gay and Lesbian Community Group, a volunteer for Amnesty and is interested in equality and diversity issues. He has previously worked in local government, the NHS and Transport for London.

Cllr Howard Hyman, said: "As Mayor, I would like to play my part in bringing people together, along with highlighting all the positive aspects of this great city, and recognising the amazing work of community, voluntary groups and organisations who do so much to improve the lives of others."

The Mayor is the first citizen of the City of Gloucester and acts as Chair of the Council. The Mayor represents the council and the city at civic, ceremonial and community events both inside the city boundaries and elsewhere.

Cllr Brown, who has been nominated for the role of Sheriff of Gloucester, has been a city councillor for Barnwood for six years where she has lived for 34 years.

The married mother of two has worked as a librarian in a number of sectors including schools and at a prison. She has a variety of interests including wine-making, travelling and cycling and walking.

Cllr Joanne Brown, said: "I am delighted to be nominated for Sheriff and Deputy Mayor of Gloucester, and consider it an honour and privilege. I have lived in the city for more than 30 years and have a great interest in Gloucester's history. I want to promote all that is good about Gloucester, to celebrate our many diverse cultures, to promote local business and to support others who already do a wonderful job in promoting our fine history and wonderful buildings."

Councillors Hyman and Brown will be formally appointed to the respective roles at the Mayor-Making ceremony during the annual council meeting on Monday 23 May following a vote by councillors.