The first two City Protection Officers (CPOs) went out on patrol in Gloucester today to help make the city a better and more secure place.

The officers, Emma Smith and Paul Cooke (pictured) took to the streets in a group scheme where Gloucester BID (Business Improvement District) has been match funded by the Gloucester City Council and the Police and Crime Commissioner's office raising £650,000 to help increase safety and cleanliness in the city centre. 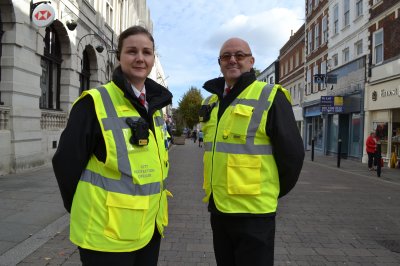 The CPOs will act as a security blanket for the city, providing a highly-visible uniformed presence that will contribute to improving community safety for businesses, their staff, customers, residents, and visitors to the city.

They will provide cover for 152 hours per week, operating seven days a week, 362 days of the year.

The CPOs will be Security Industry Authority (SIA) approved, first aid trained and have experience of security work in the city. They will be working closely with the City Policing Team, the city council, local security officers and the local businesses to work towards a safer and more secure city. 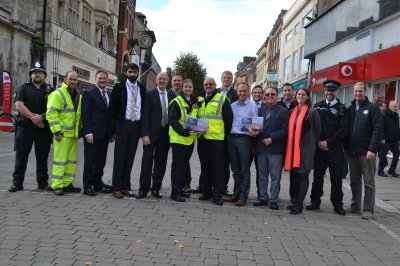 Nick Brookes, chairman of the Gloucester BID who owns the Knobbly Cob café and sandwich bar in Westgate Street, said: ""Helping the city to be a safe, secure and welcoming place has been one of the key focuses of Gloucester BID and is what businesses have asked the BID to deliver.

"It is fantastic to have been able to work with City Safe, Gloucester City Council and the Police and Crime Commissioner's Office to deliver the CPOs so quickly. The highly visible CPOs will be linked through radio and cell phones allowing BID members and BID voluntary members to get assistance with incidents. 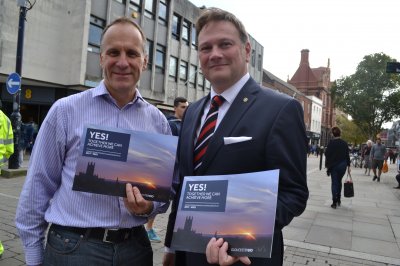 " I think this is a real win for the city and another positive step to making the city a safer cleaner place for people to visit shop and do business."

The duties the CPOs will include:

• Tackling low-level anti-social behaviour during the early evening in support of businesses.

• Report on and when appropriate deal with graffiti, damage, fly-tipping and when levels of cleanliness are below standard.

• Responding to minor incidents reports as directed by police CCTV, City Policing Team or as requested by business. 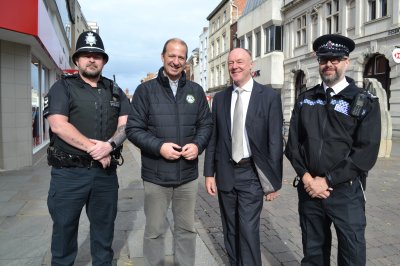 Martin Surl, the Gloucestershire Police and Crime Commissioner said: "The idea of having City Protection Officers is now well established elsewhere and research shows that working in partnership with the police, local business, local authorities and other stakeholders, they can make a major contribution towards safety and security.

"I understand why they can have a role to play in Gloucester, but it is also a delicate one of which enforcement is only a part. It's just as important they are good ambassadors."

Councillor Jennie Watkins, deputy leader of the city council and cabinet member for communities and neighbourhoods said: "Improving the environment of the city centre for businesses, residents and visitors is a council priority. The introduction of the City Protection Officers will be key to achieving this aim and we are delighted that we have been able to work together with the BID and the Police and Crime Commissioner's Office to deliver this shared vision"

Steve Wood, Local Policing Inspector said: "This is a fantastic opportunity for Gloucestershire Constabulary to work alongside another new partner as we continue to focus our efforts on keeping our communities' safe from harm. We welcome the introduction of the City Protection Officers who I'm confident will be a positive addition to the city of Gloucester."

The final two virtual events for the proposed M5 Junction 10 Improvements Scheme are due to take place.

Police are appealing for witnesses.

The takeover of Stagecoach - which has a big depot in Gloucester - by National Express, is be investigated by the Competition and Markets Authority.