When a major development threatened to bulldoze and close a 100-year-old business the family behind it were having none of it.

News that the HS2 rail link was on a collision course with the then Staffordshire farming business the Barnes family could easilly have called it a day.

The high-speed rail link plans were on course to destroy many of the existing outbuildings, the farm shop, the wedding venue and even the family home.

But instead of walking away the family decided to plough some £7.5 million into Gloucestershire, taking over Whalley Farming at Whittington, Cheltenham. 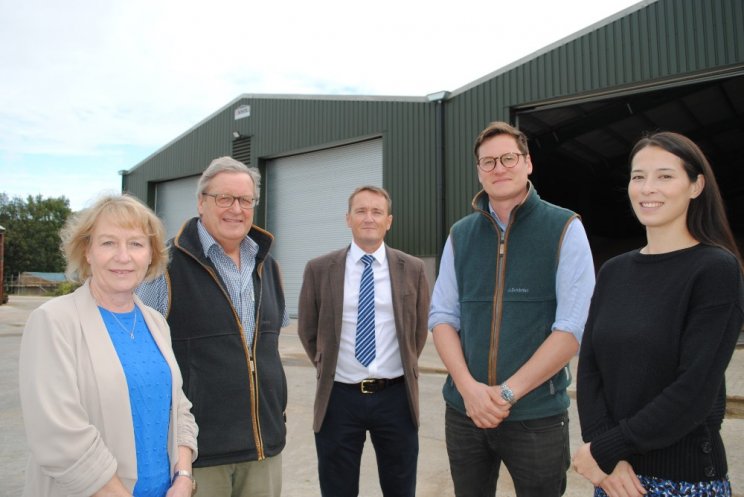 The seeds were sown for the thriving family firm to continue, and the next generation to grow with it, and that ambition has not gone unrecognised. The family has just revealed a further £500,000 of investment, courtesy of Barclays Bank.

Two new half-a-million-pound grain stores and weighbridge will quadruple the farm's existing capacity to more than 2,000 tonnes, with the units capable of storing wheat, barley and oilseed rape for its own neighbouring farms.

John Barnes said: "The HS2 development came as such a shock. We had built a successful family arable farm over 20 years with farm shop and diversified into a successful wedding venue.

"It would have been very easy to just walk away but farming is in the blood and we wanted to ensure the legacy continued into future generations with my son Henry now taking the helm."

He added: "Investing into the business in the current financial climate was a major financial commitment but something we wanted to do.

"Converting this former dairy farm into a mixed arable farm has been challenging but we have already won the Best Medium Farm in the North Cotswolds from the Gloucestershire Root, Fruit and Grain Association (described as the Rural Oscars), so we must be doing something right.

"It is still hugely rewarding producing food for the nation and this region seems to have a large concentration of young farmers, which is a great environment for my son to be part of and great news for the future of the industry.

"We already have further diversification plans under way supported by Barclays to open luxury holiday barns and hope to open before Christmas this year."

The Barnes family can trace its farming dynasty back to 1921, and the investment in Whalley Farm, allows the next generation, Henry Barnes, to take the reins on this new agricultural adventure.

Brian O'Connor, Barclays agricultural relationship director, said: "This is a great example of someone using personal experience to overcome adversity and spot a business opportunity.

"Barclays' research identifies the significant role 'entrepreneurs' play in the rural economy and is committed to supporting such propositions.

A local broker introduced the Barnes's to Barclays business development manager, Scott Clacher, after they struggled to obtain funding support from their former bank.

"This is a business which truly understands the importance of diversification within its business", said Mr O'Connor.